Salix starkeana Willd. is a low-growing shrub with small leaves, but the species is rather variable in appearance. The main distinguishing characters are the small size of the wide and often slightly bent leaves, the presence of stipules, and the raised veins on the underside of the leaves. S. starkeana is distributed throughout the Holarctic region except Western Europe. The species is present in the whole of Northern Europe, but in the northernmost parts of the region it is represented by the taller subspecies S. starkeana xerophila, which can reach a height of up to two meters. Currently, the species status of diffent (sub)species within the S. starkeana complex is unclear, and the correct name for all may be Salix bebbiana Sarg., a name that has traditionally been used for North American forms of the complex. 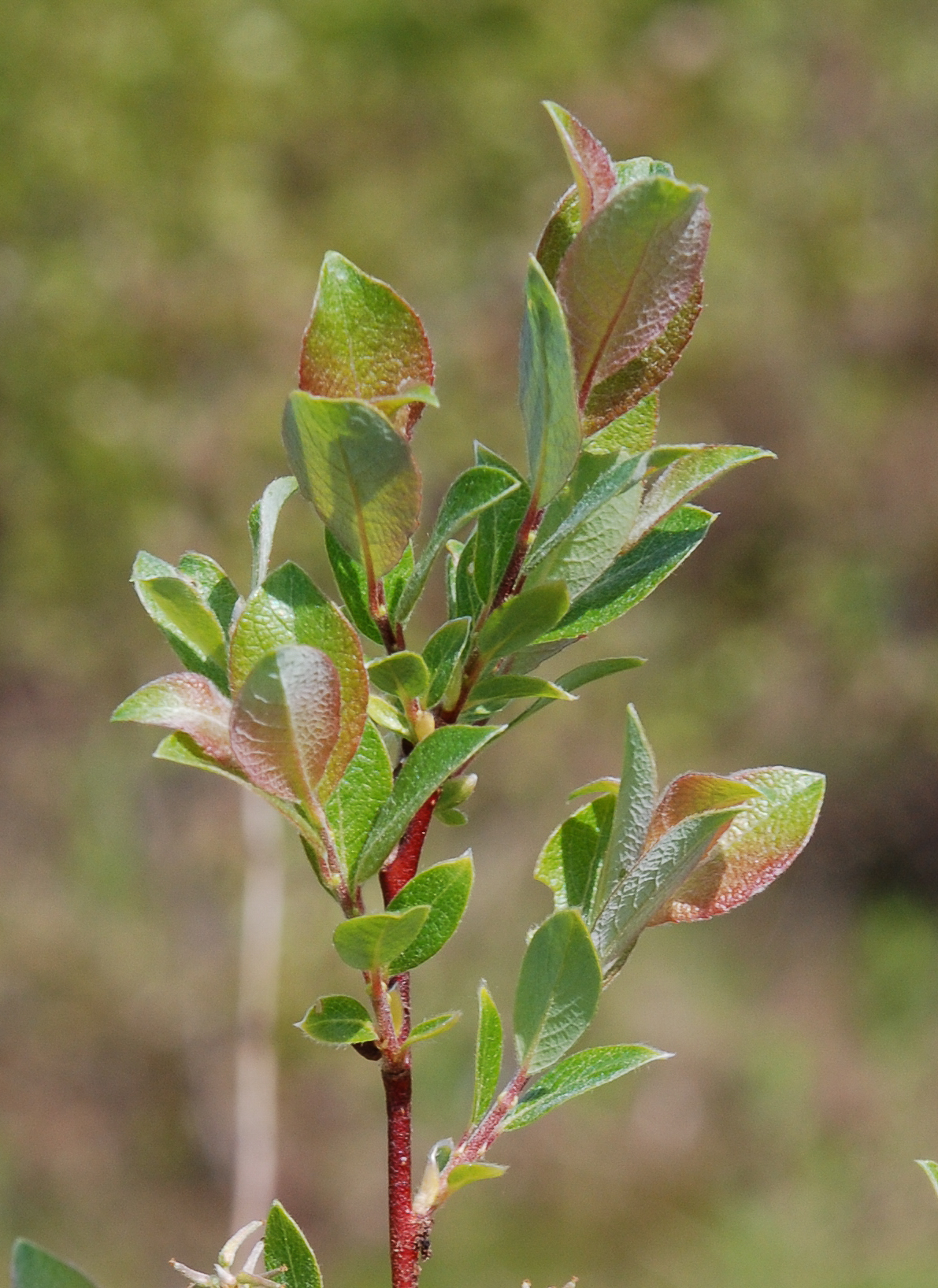 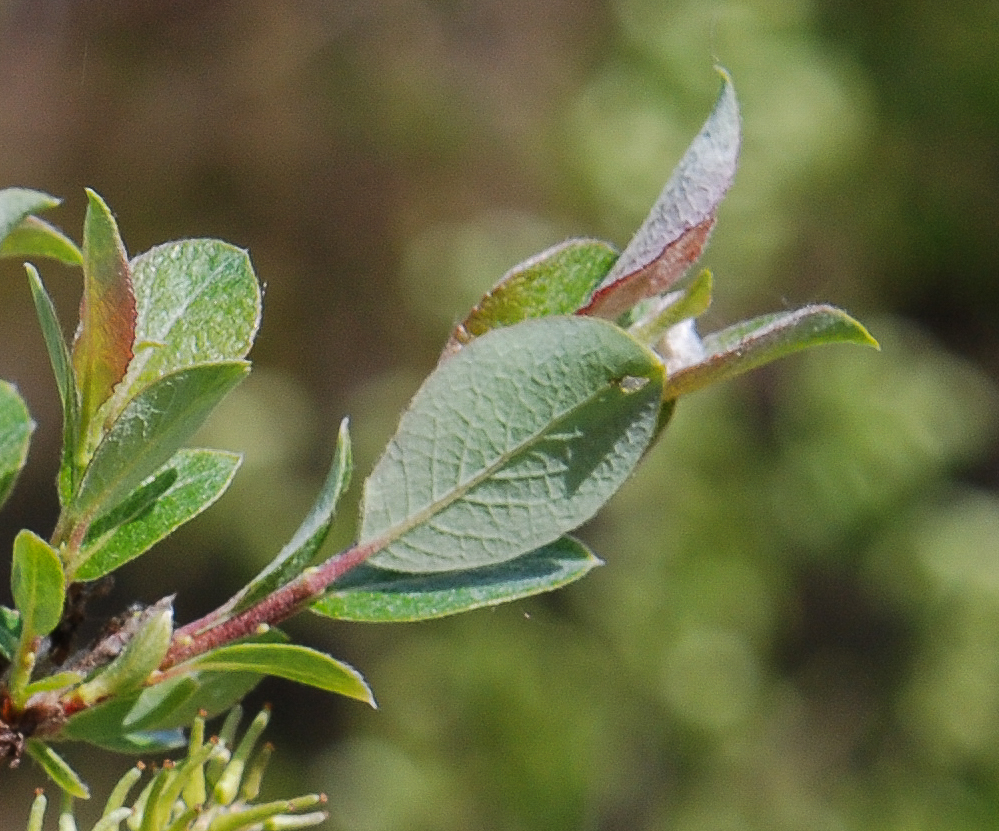 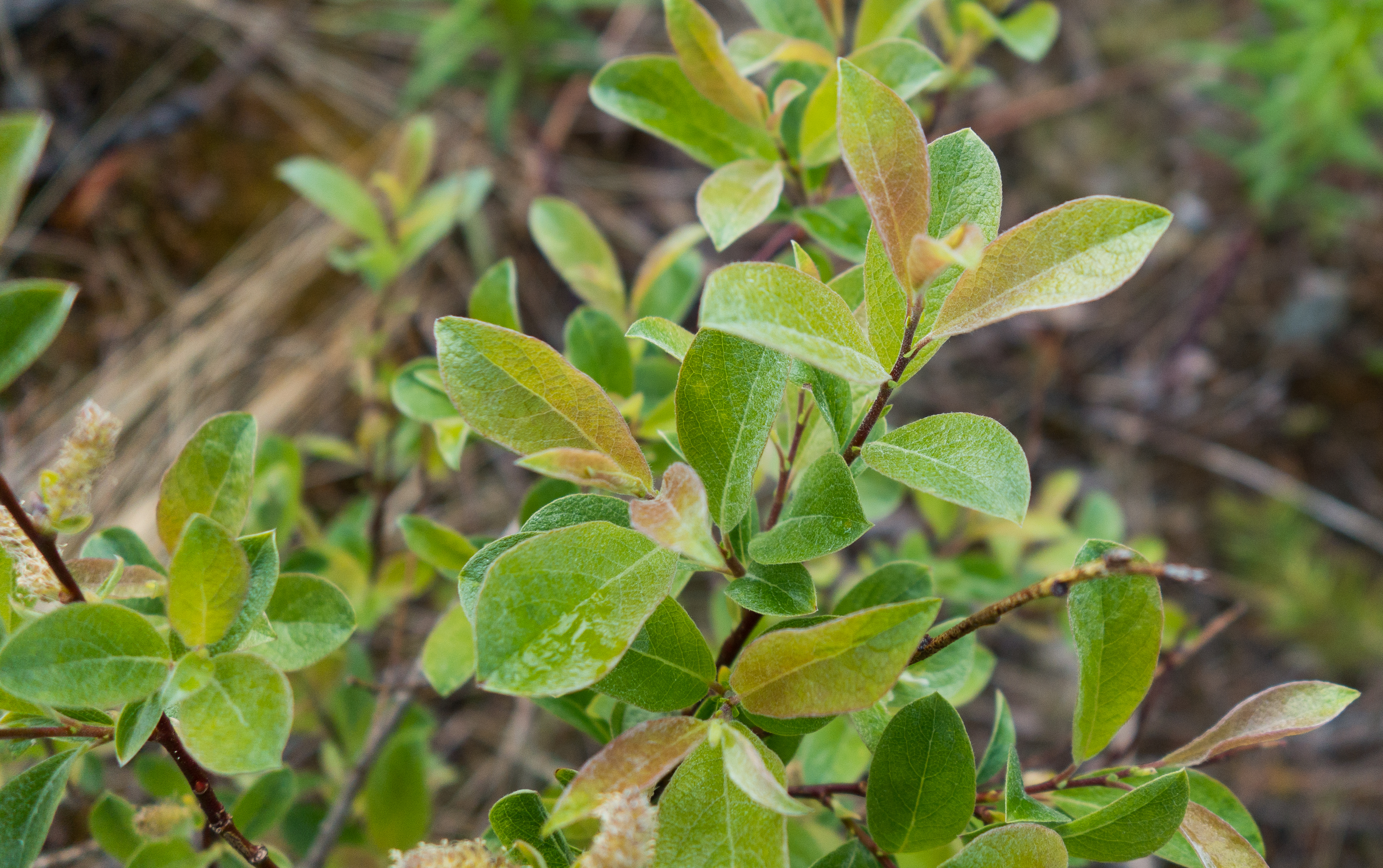 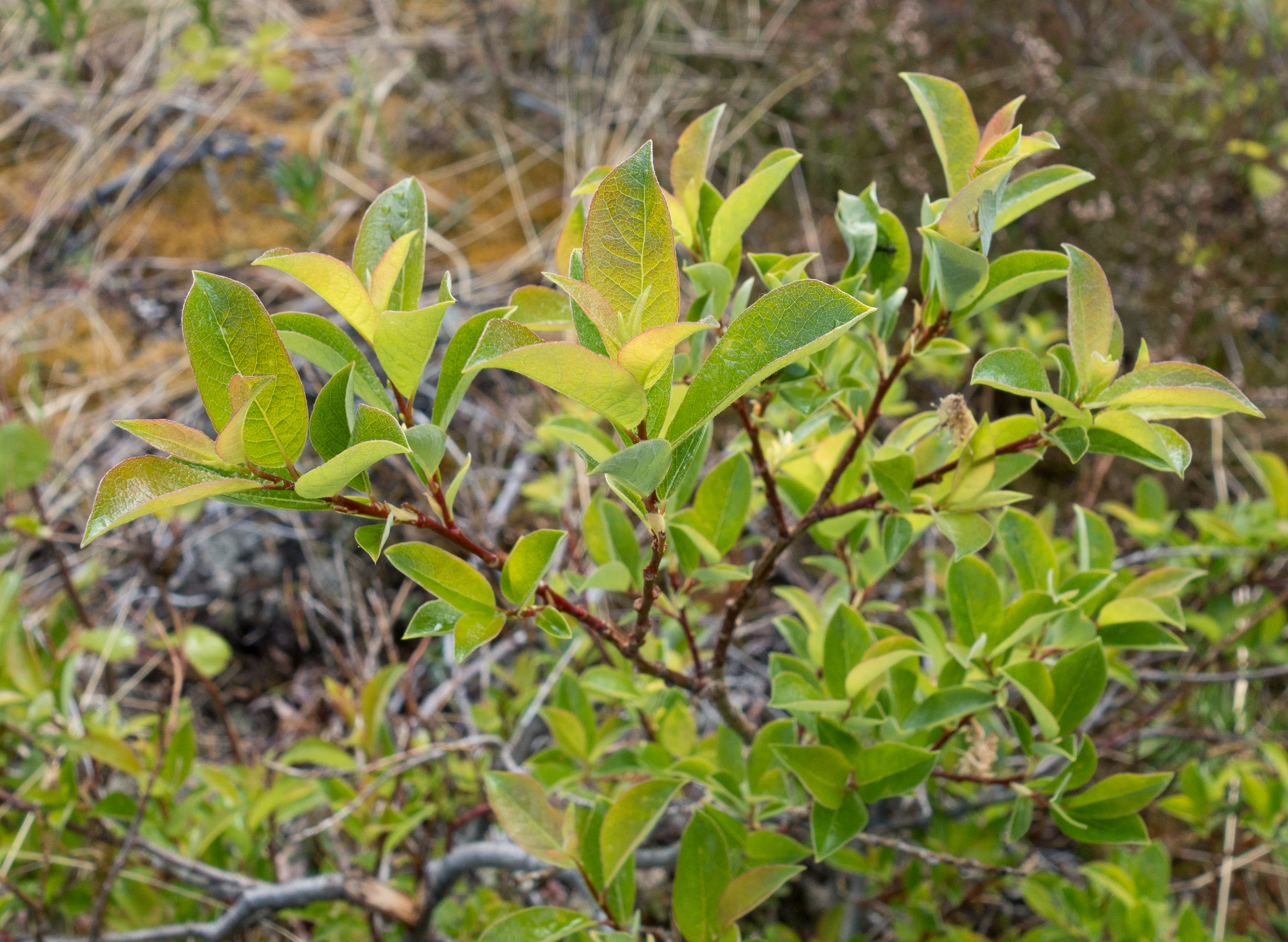 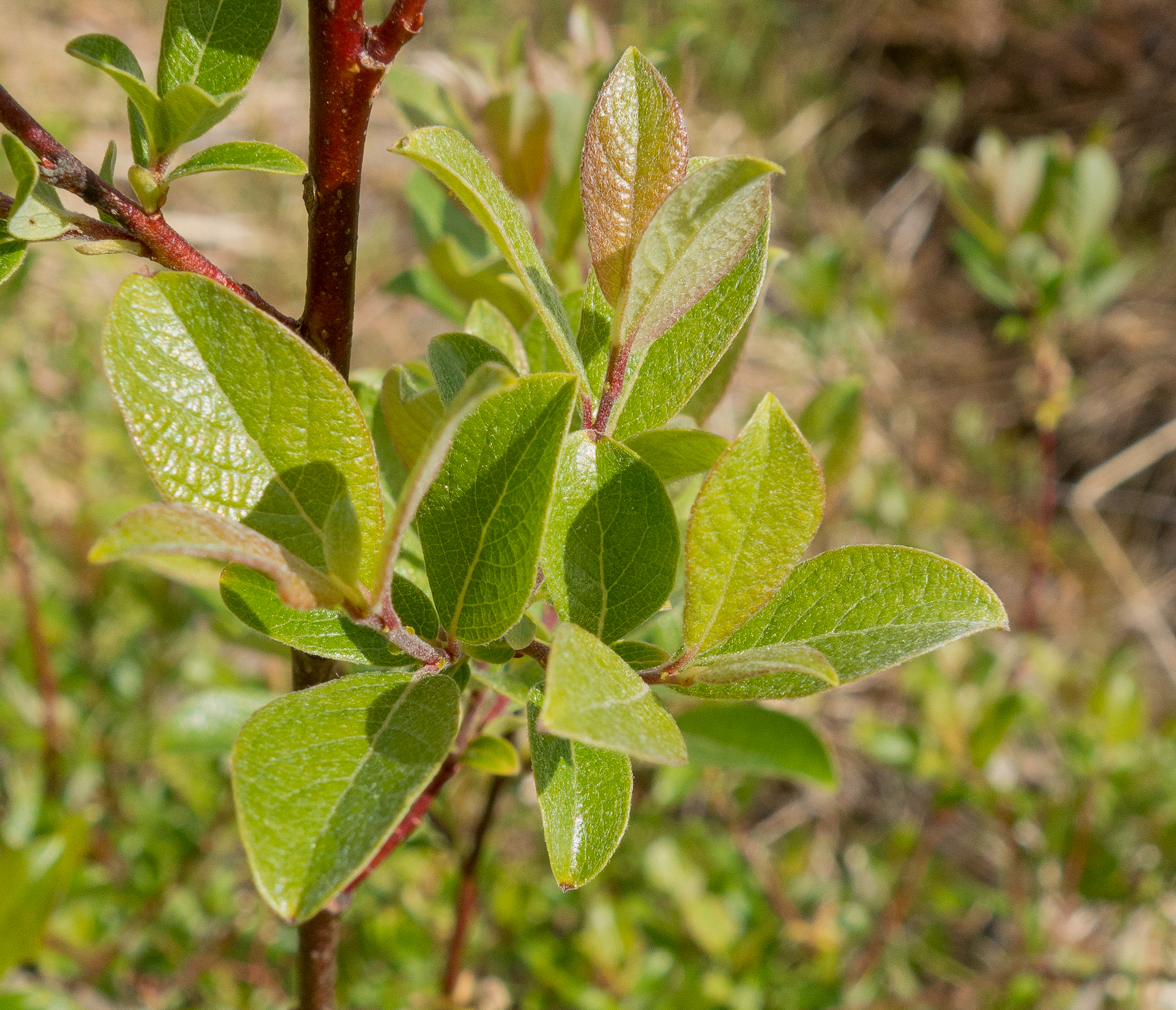 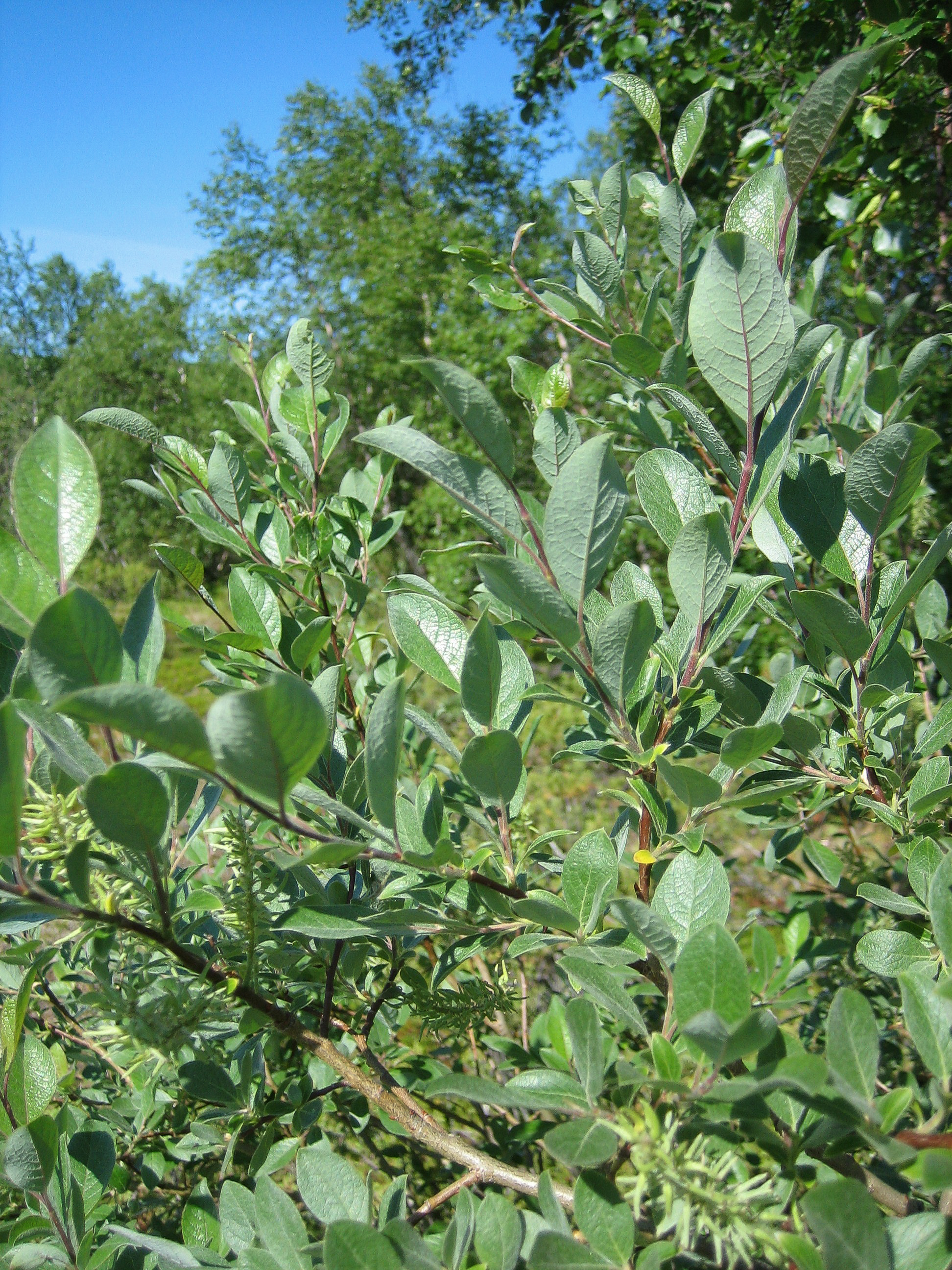 The leaves of S. starkeana are usually less than five centimetres in length, and are broadly ovaliform with tips that can be slightly bent to the side. Young leaves may be reddish. The upperside of the leaves is matte and hairy or glabrous and shiny, and veins may be slightly depressed into the surface. The lower side of the leaves is pale grey, and veins are elevated from the leaf surface. The amount of pubescence on the lower side varies, but is usually present at least along the veins. Leaf shape and the elevated veins on the underside of leaves will help to distinguish S. starkeana individuals with glabrous shiny leaves from S. phylicifolia. In the northern subspecies S. starkeana xerophila, both sides of the leaves are covered by short grey pubescence.

Current-year shoots are thin and red or yellowish, and may be hairy or glabrous. Buds are small, and stipules are usually present at petiole bases, but they may be small. Older branches are reddish brown and have lengthwise ridges in the wood under the bark. 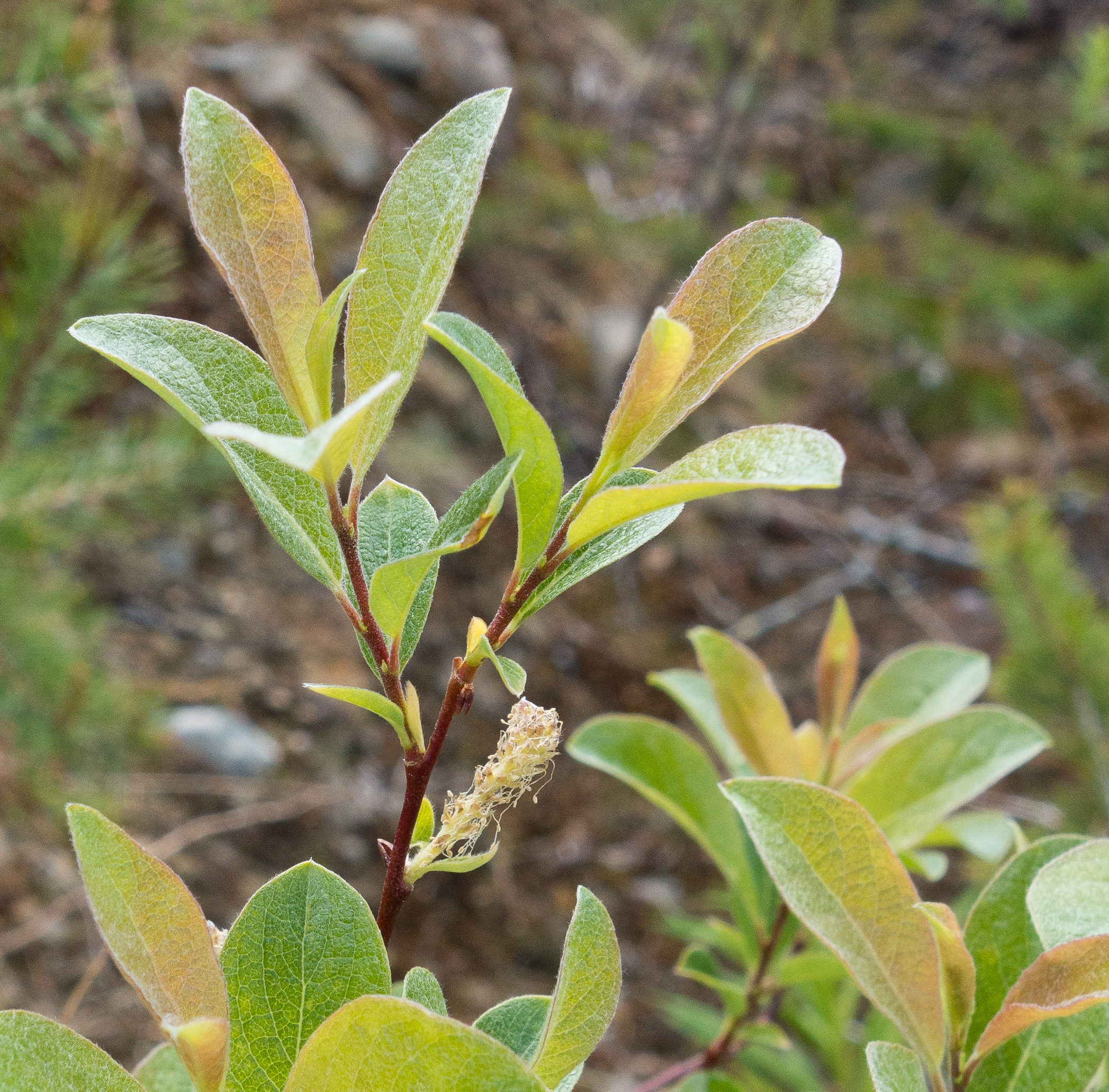 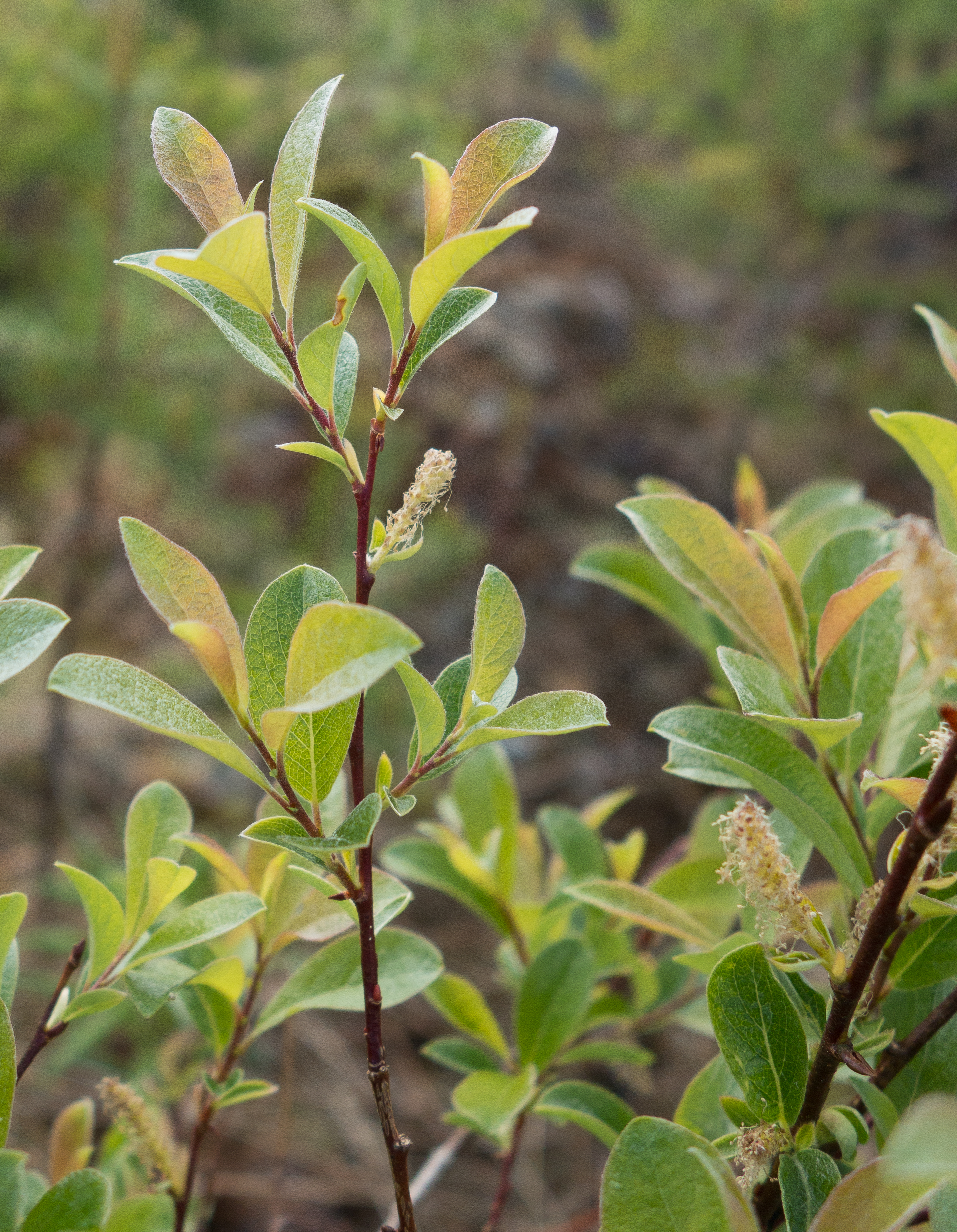 The male inflorescences of S. starkeana are relatively small, and are situated in the tip of longish stalks with a few small leaves. Bracts are narrow and greenish yellow. Flowering occurs at the same time as leafburst. 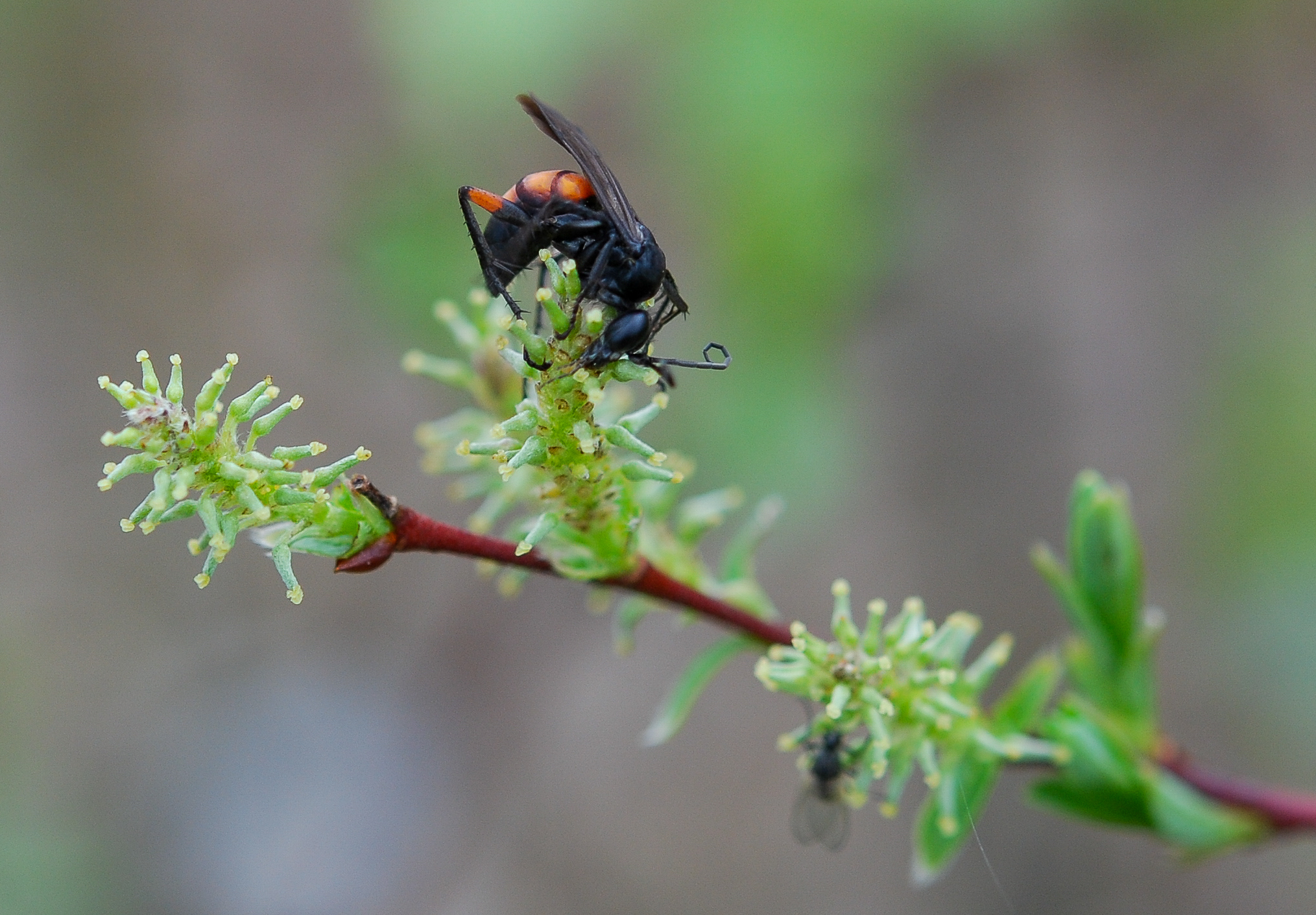 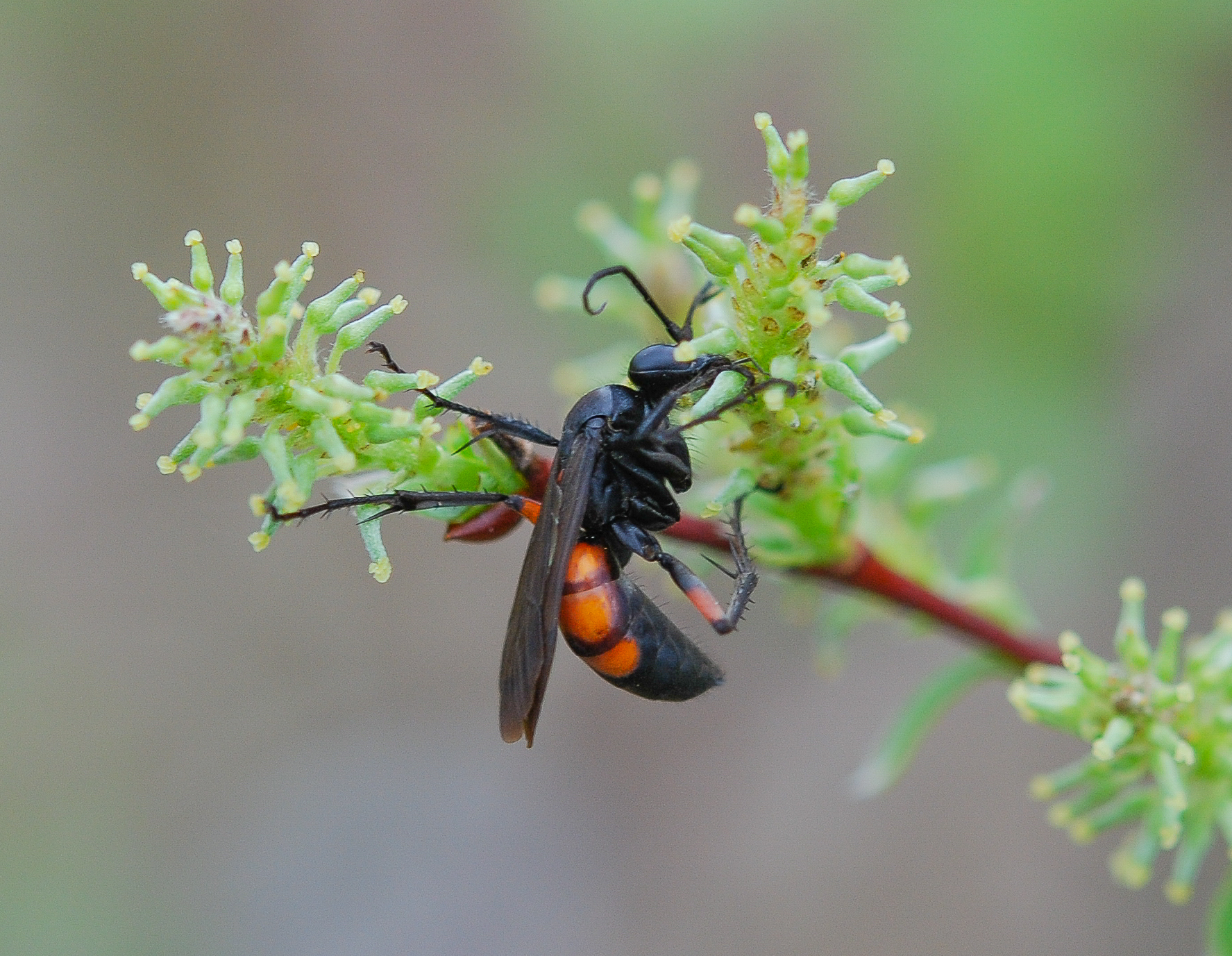 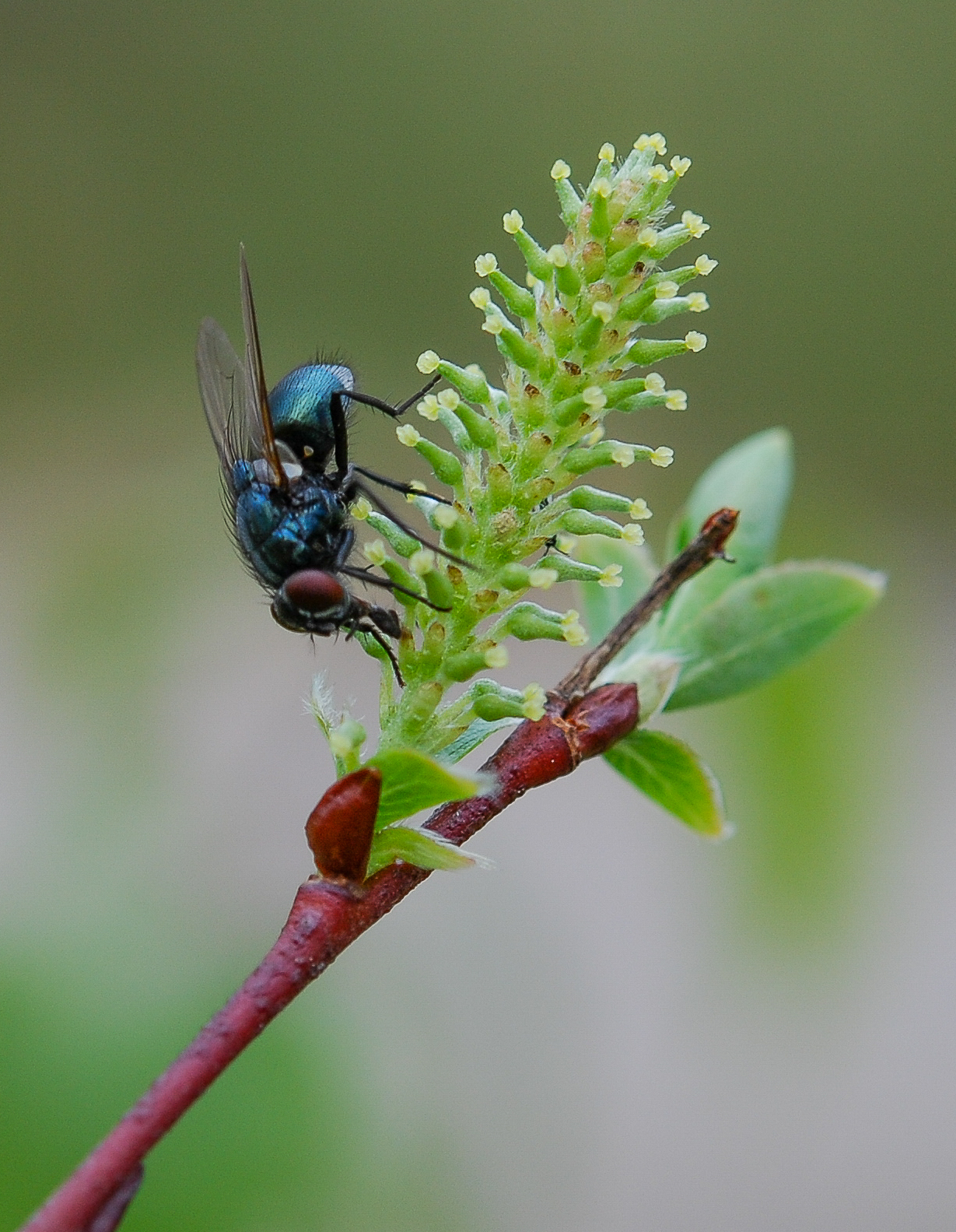 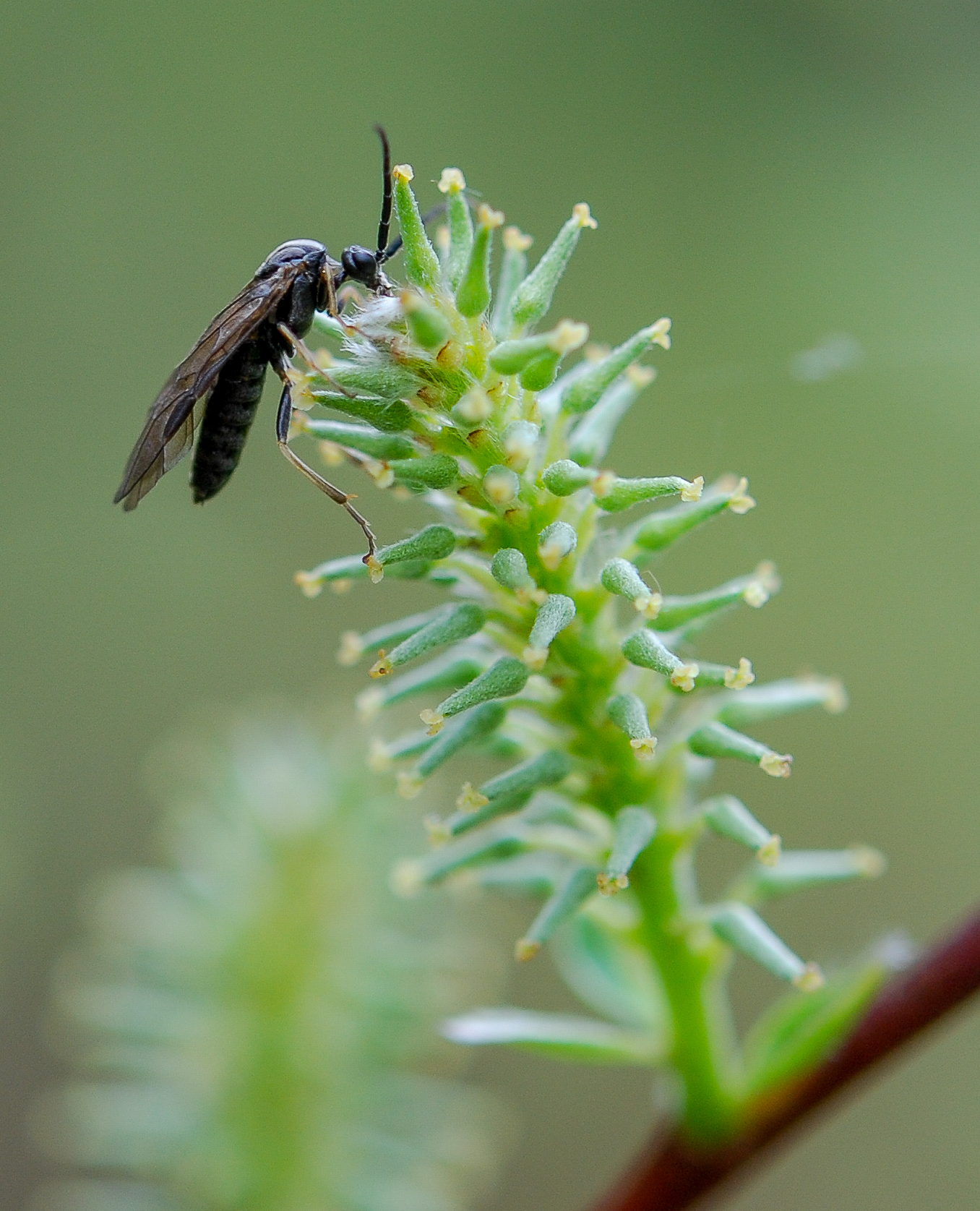 S. starkeana female inflorescences have relatively long stalks with a few small leaves, and individual flowers are thin and sparsely arranged around the central axis. Ovaries are green and hairy, stigmas are yellow, and bracts are greenish yellow with a brown tip. Flowering commences contemporaneously with leafburst. 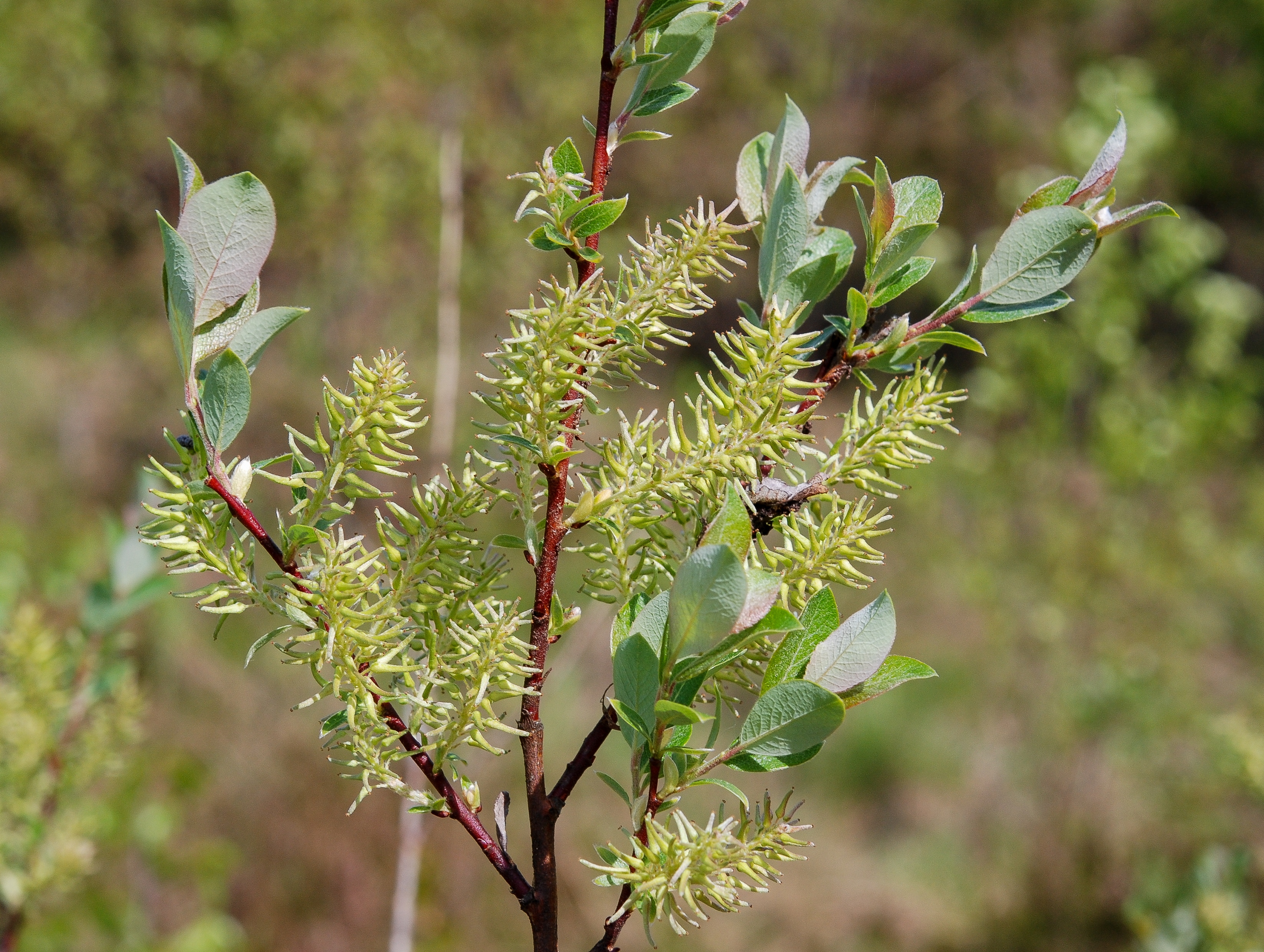 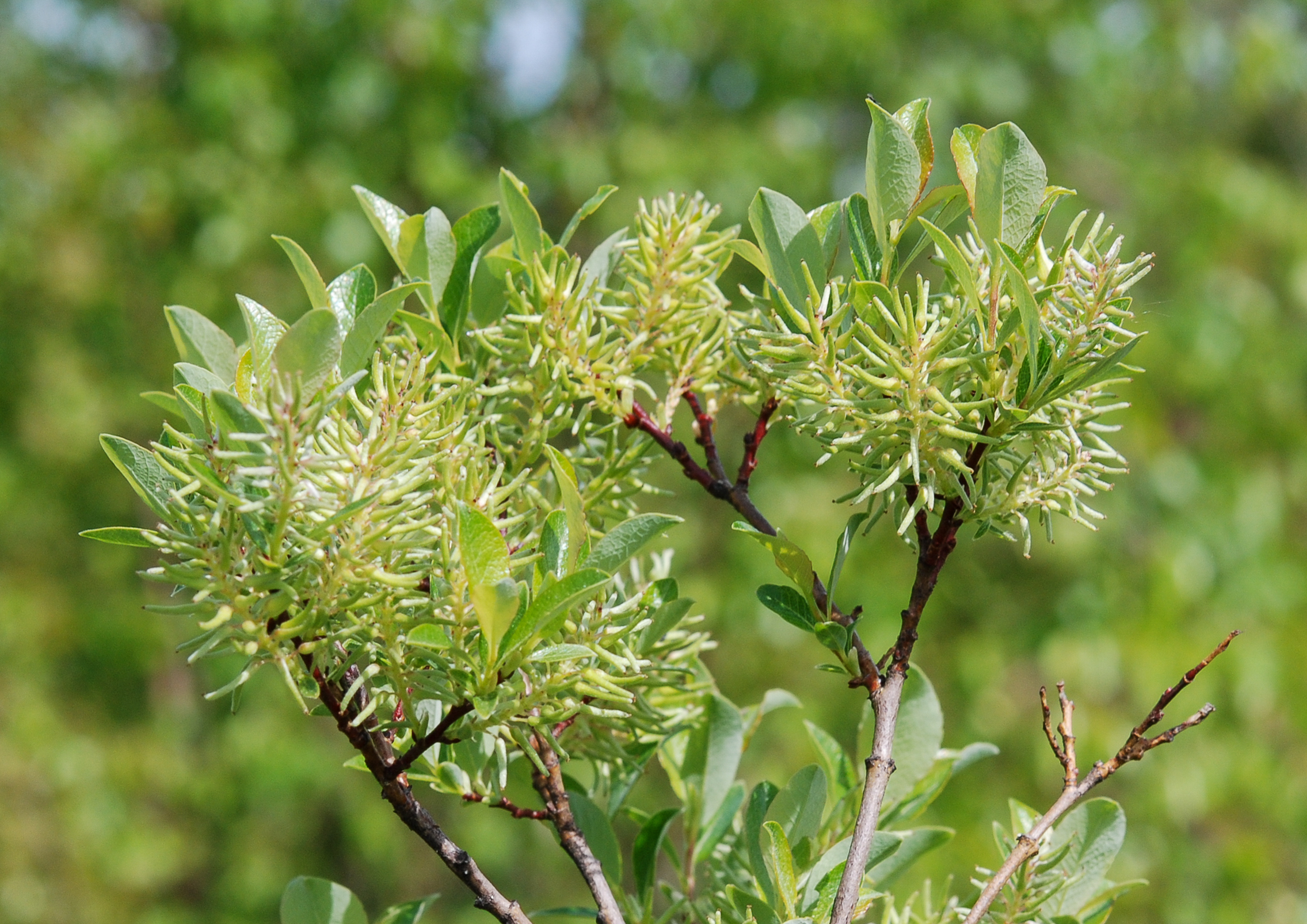 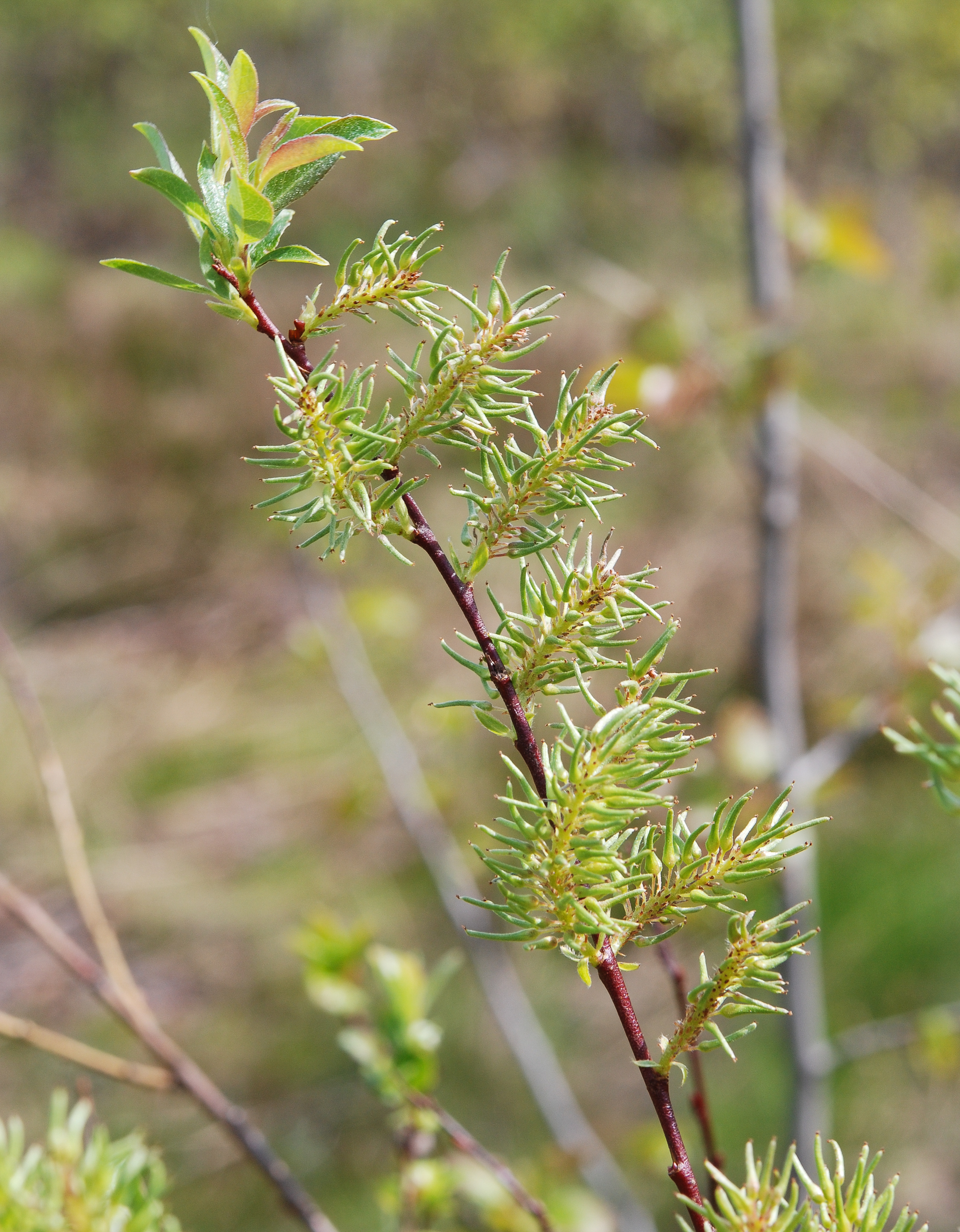 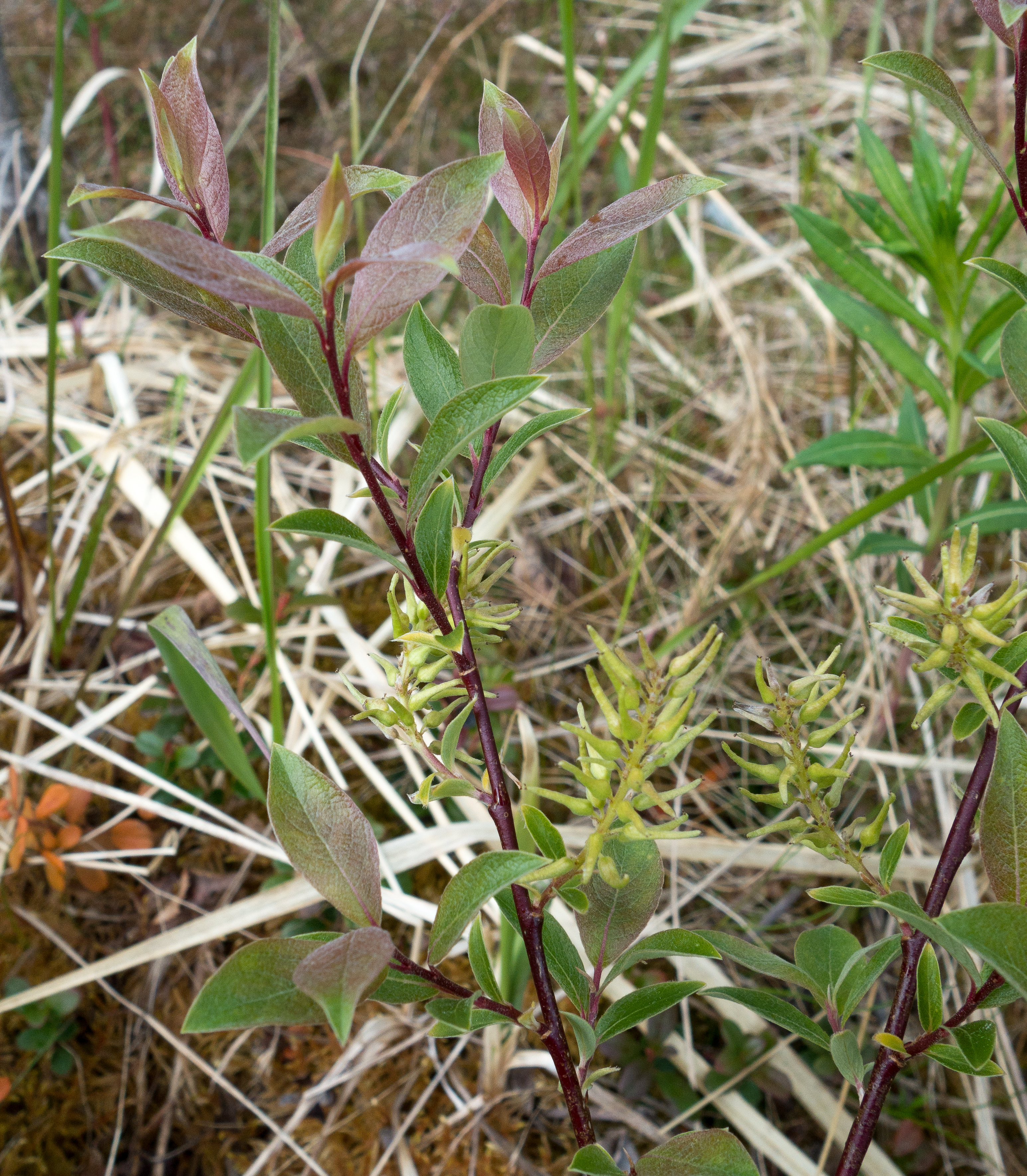 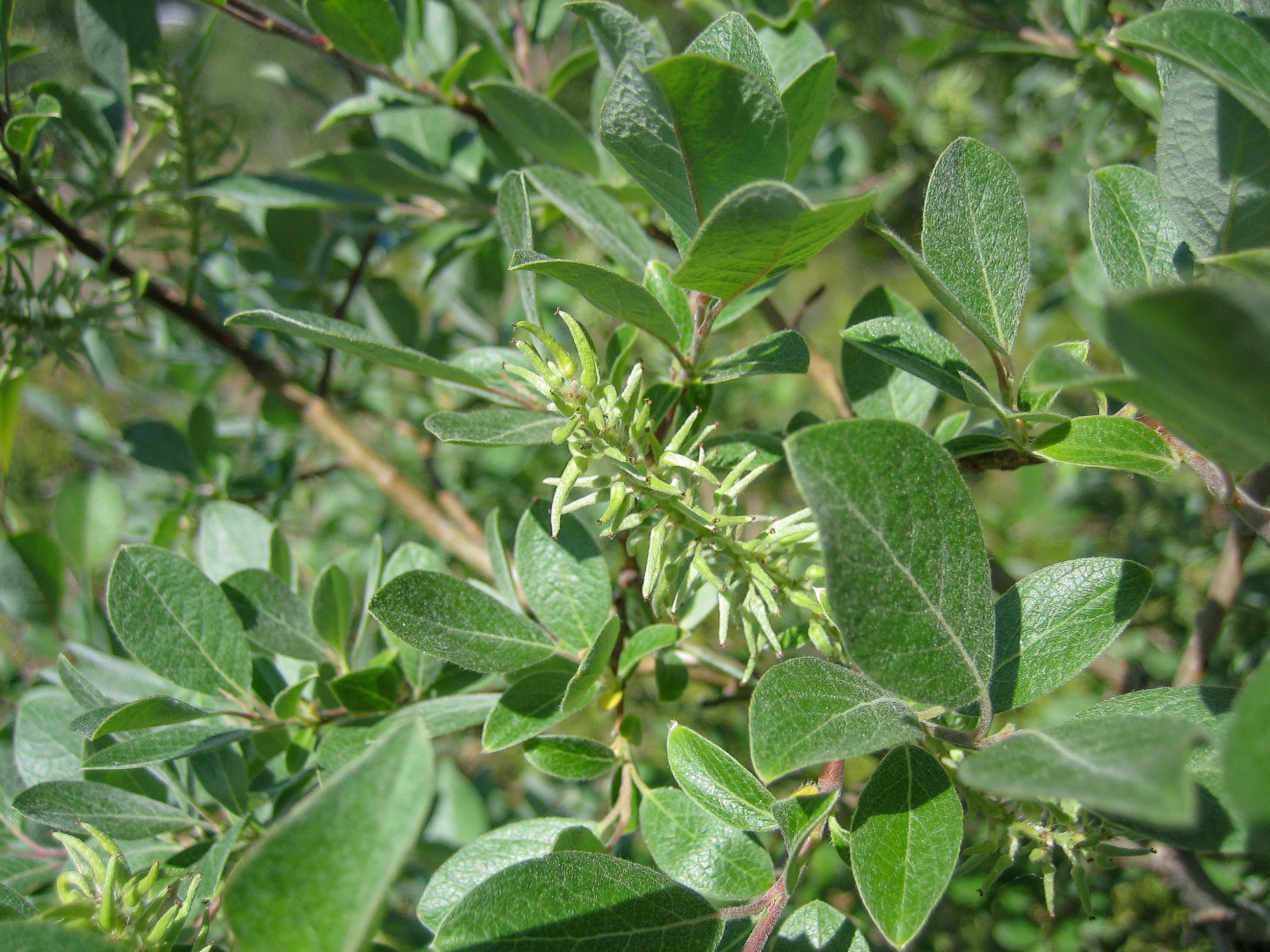 S. starkeana catkins are supported by relatively long stalks that have a few small leaves, which, however, may fall off during fruit maturation. Individual capsules are elongated and covered by short pubsecence, and they are sparsely arranged around the central axis. 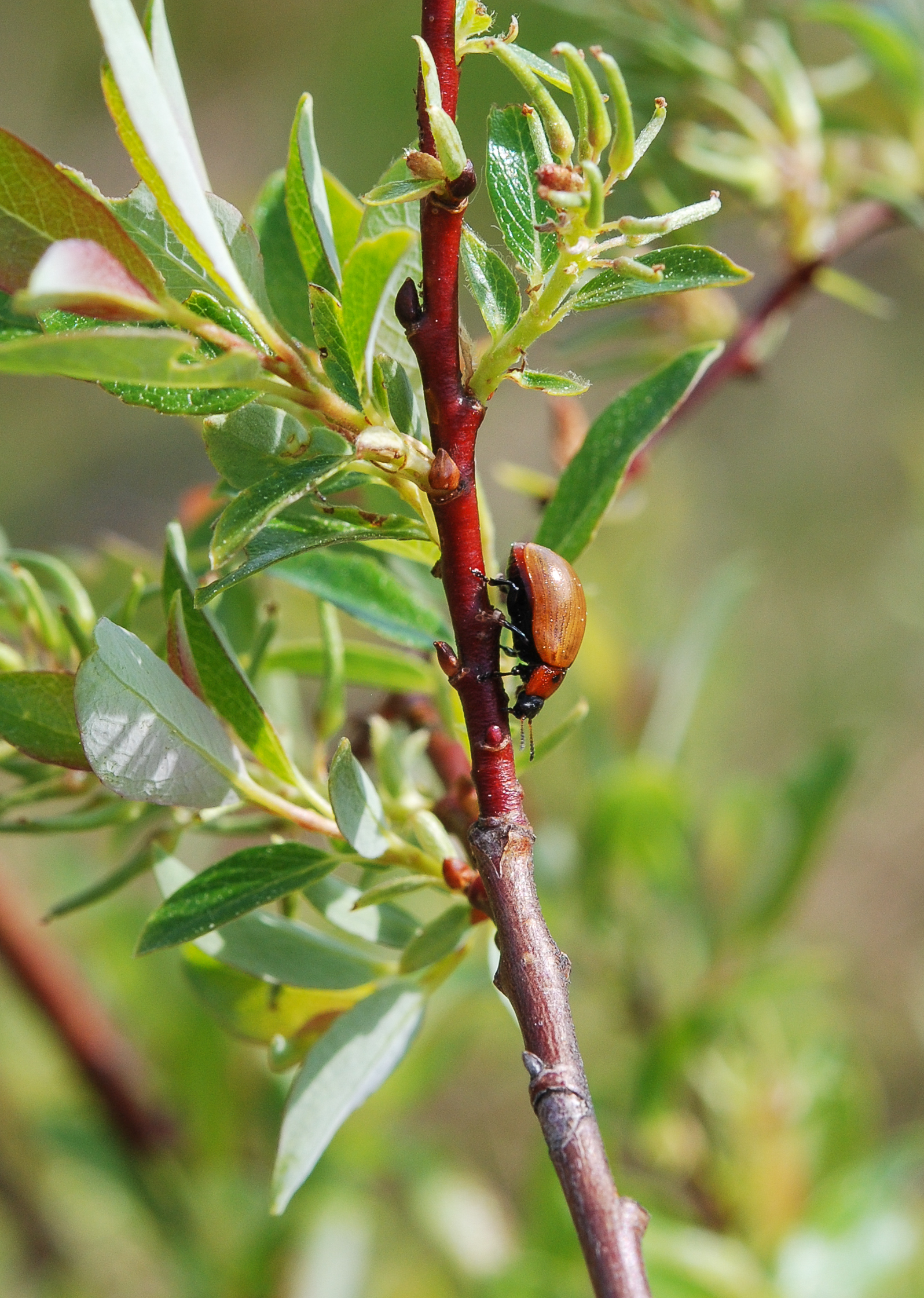 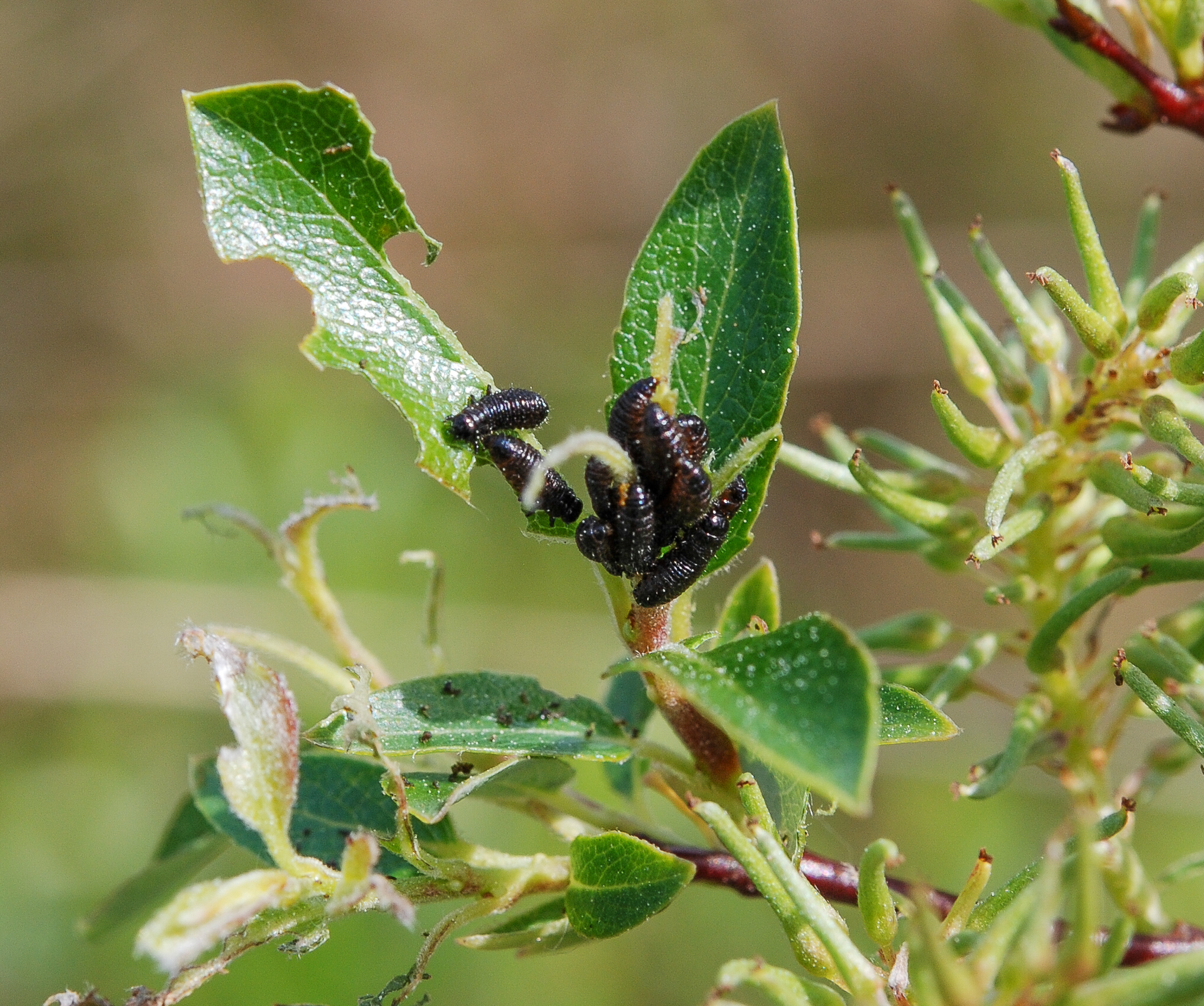 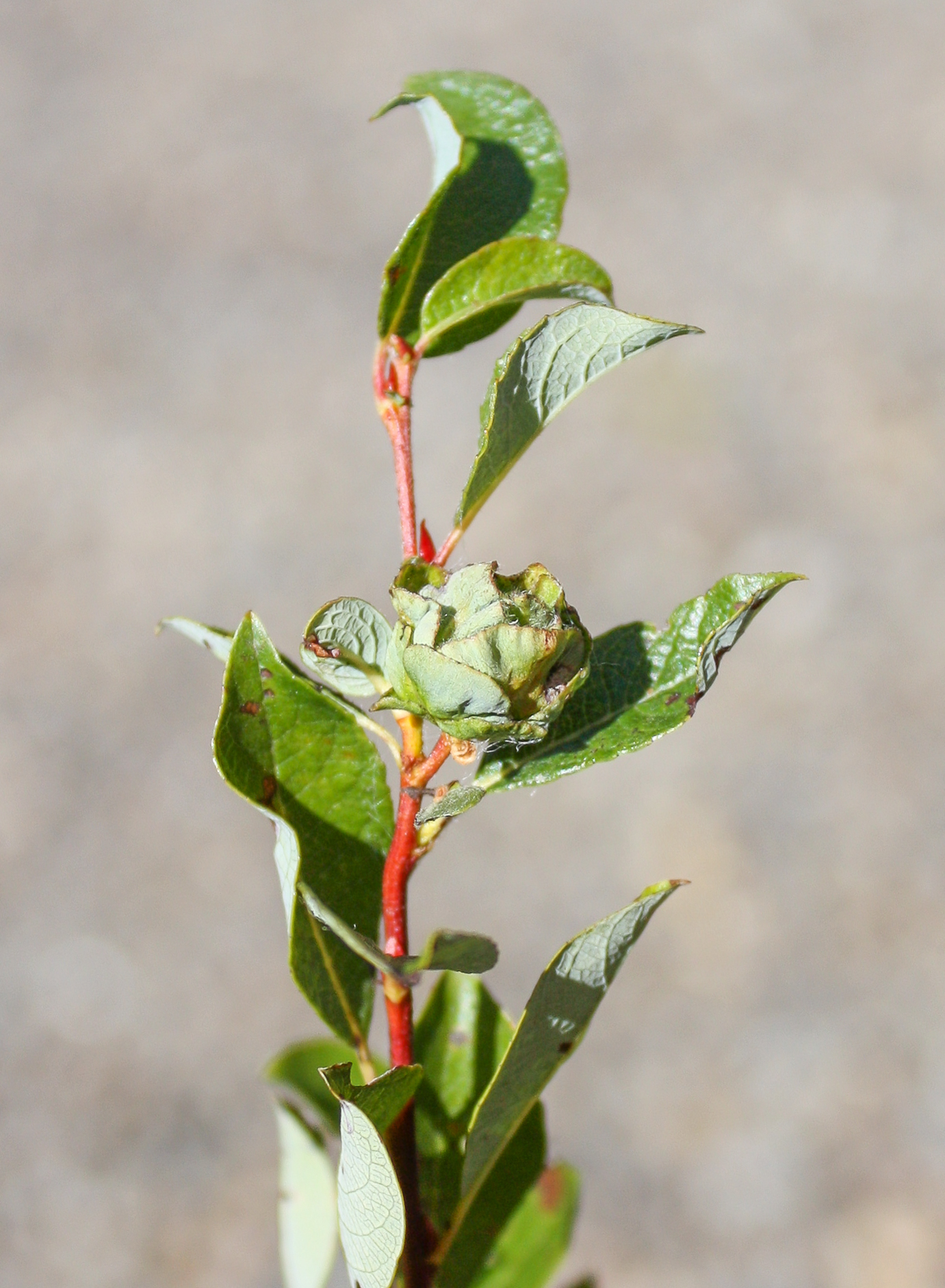 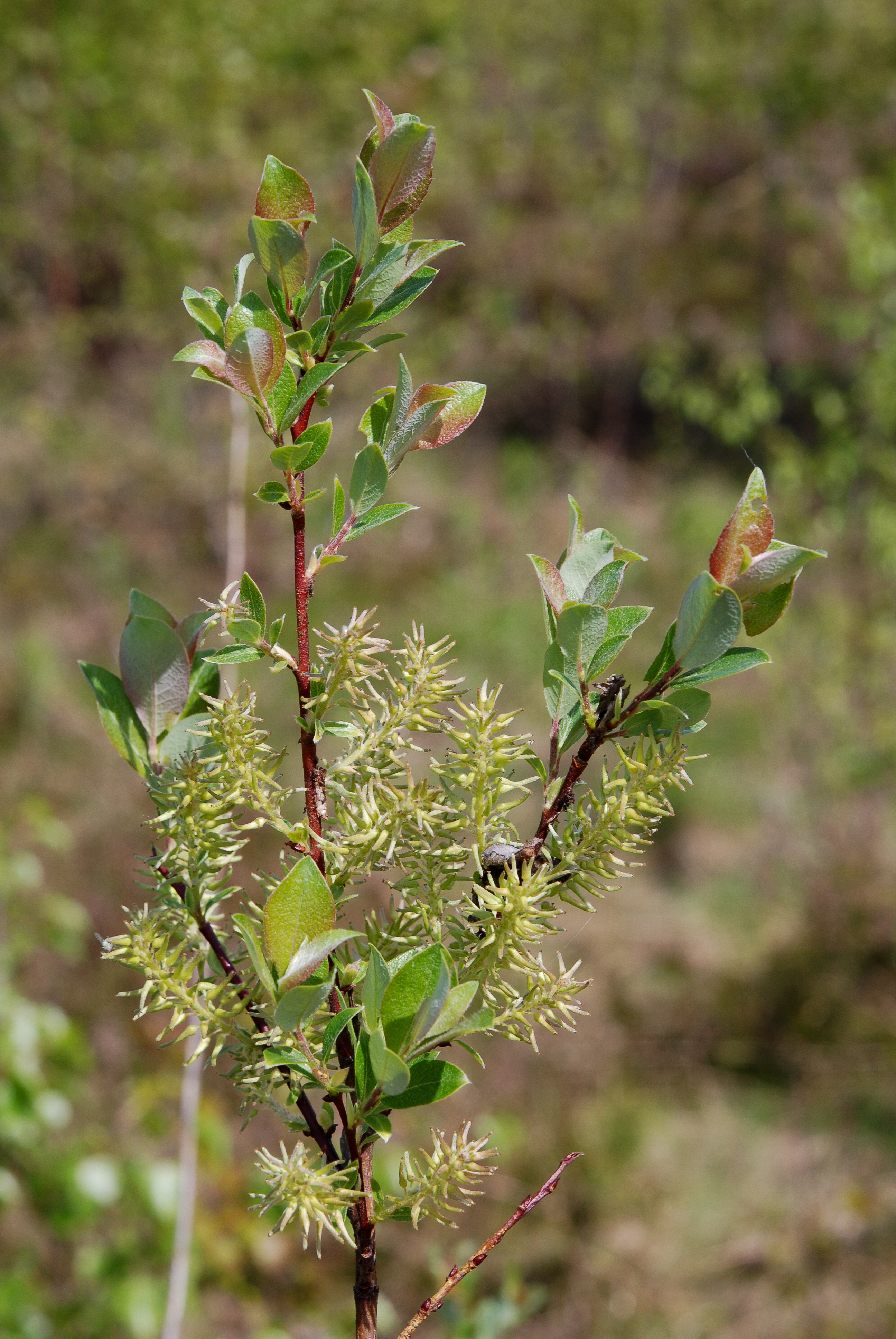 S. starkeana is most often found on relatively dry soils on sites with a lot of light, typically on clearcuts, along forest edges, or in pine forests. The larger northern subspecies S. starkeana xerophila grows as undergrowth in dry mountain birch forests and along sandy river shorelines. S. starkeana is fed upon by various beetles, lepidopterans, and sawflies, and is known to host several species of gall-inducing sawflies and midges, but systematic studies on herbivore communities are lacking. The flowers attract flies, sawflies, as well as other hymenopterans, but the pollinator communities are likewise poorly explored.