Salix polaris Wahlenb. is on average the smallest of the three dwarf willow species of northern Europe. It resembles its close relative S. herbacea, but the leaves of S. polaris are slightly thicker and glossier and the leaf margin is entire, and mature catkins are hairy. Like S. herbacea, S. polaris inhabits the highest and coldest areas of fjells, but is clearly more demanding in its habitat and nutrient preferences. Typical sites are, for example, dripping wet slopes right below late-melting snow patches in areas with limestone in the ground. The species is widely distributed across the Eurasian and North American Arctic; in Fennoscandia, it grows on the northern fjells, but extends quite far south along the high Norwegian fjell chain. 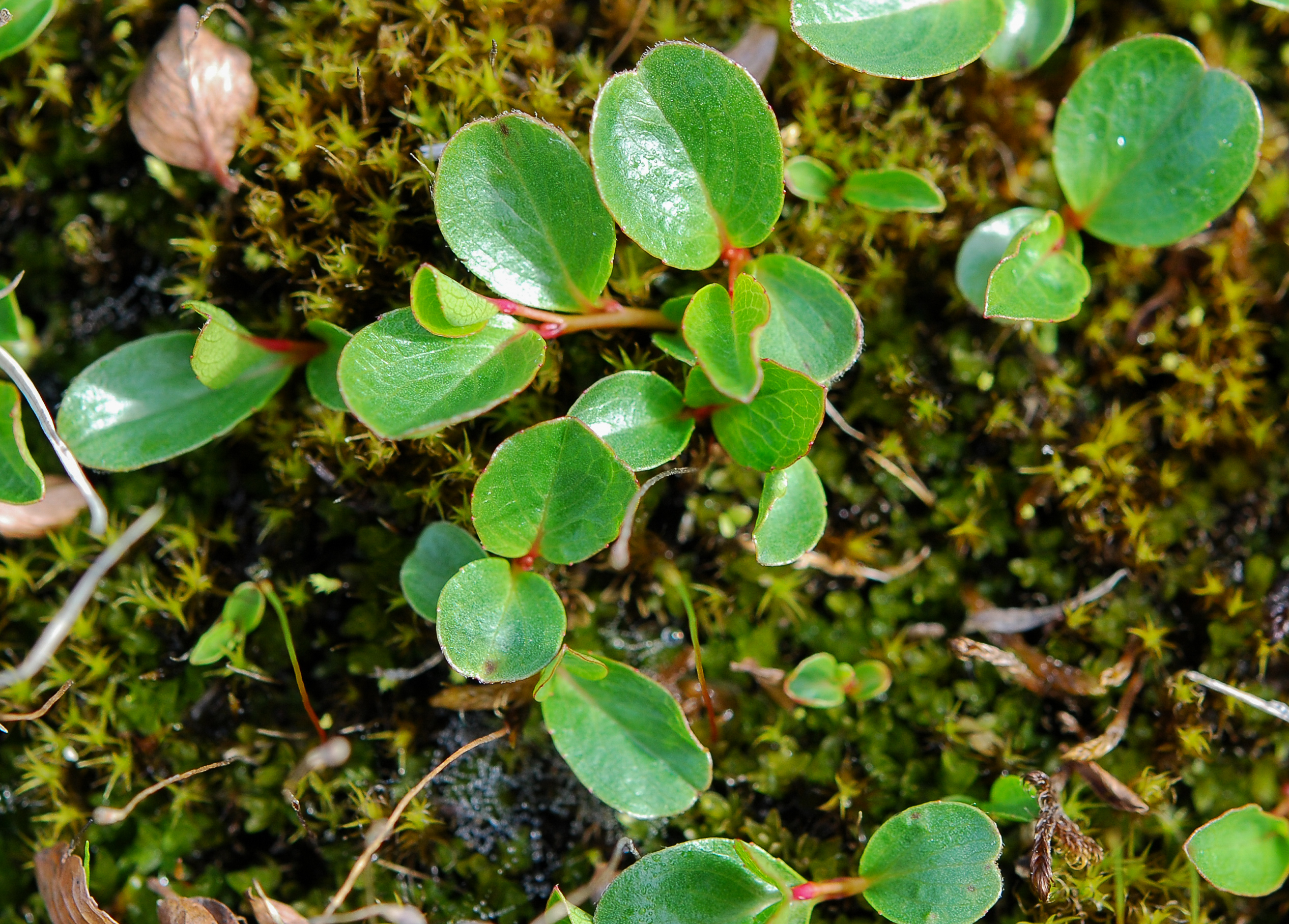 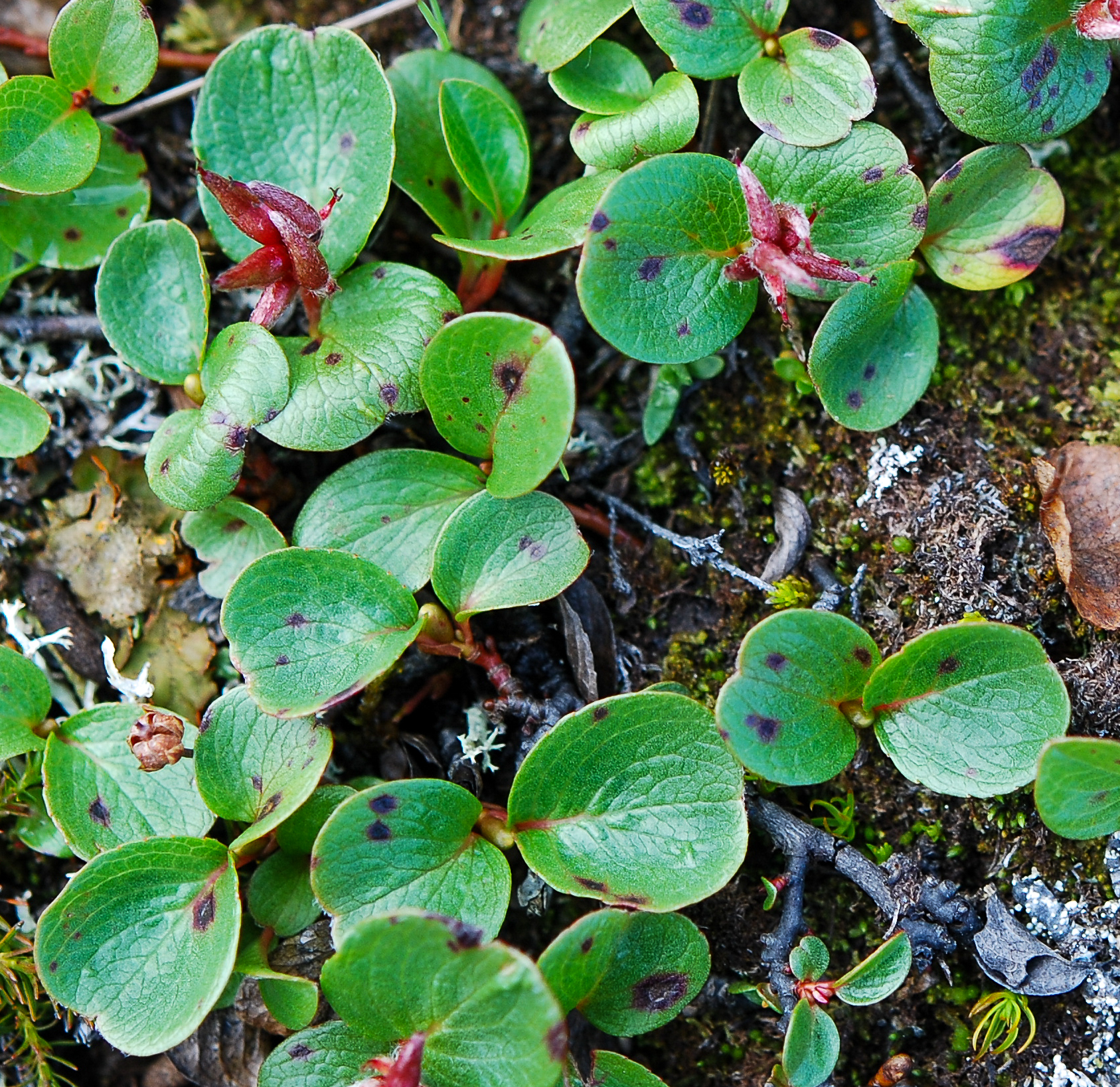 Salix polaris leaves are small, nearly round and have entire (toothless) margins, although small teeth may be present on some individuals. The leaves are shining green on both sides, and lack the fine network of veins that is visible in S. herbacea leaves when looked at against light; instead, the largest veins fan out in a regular fashion towards the tip. The tip may be notched, and long thin hairs can be present near the margin.

The thin shoots grow along the soil surface, or submerged inside the soil or in moss cover; older shoots are woody and may be relatively thick. Buds are small and stipules are lacking. 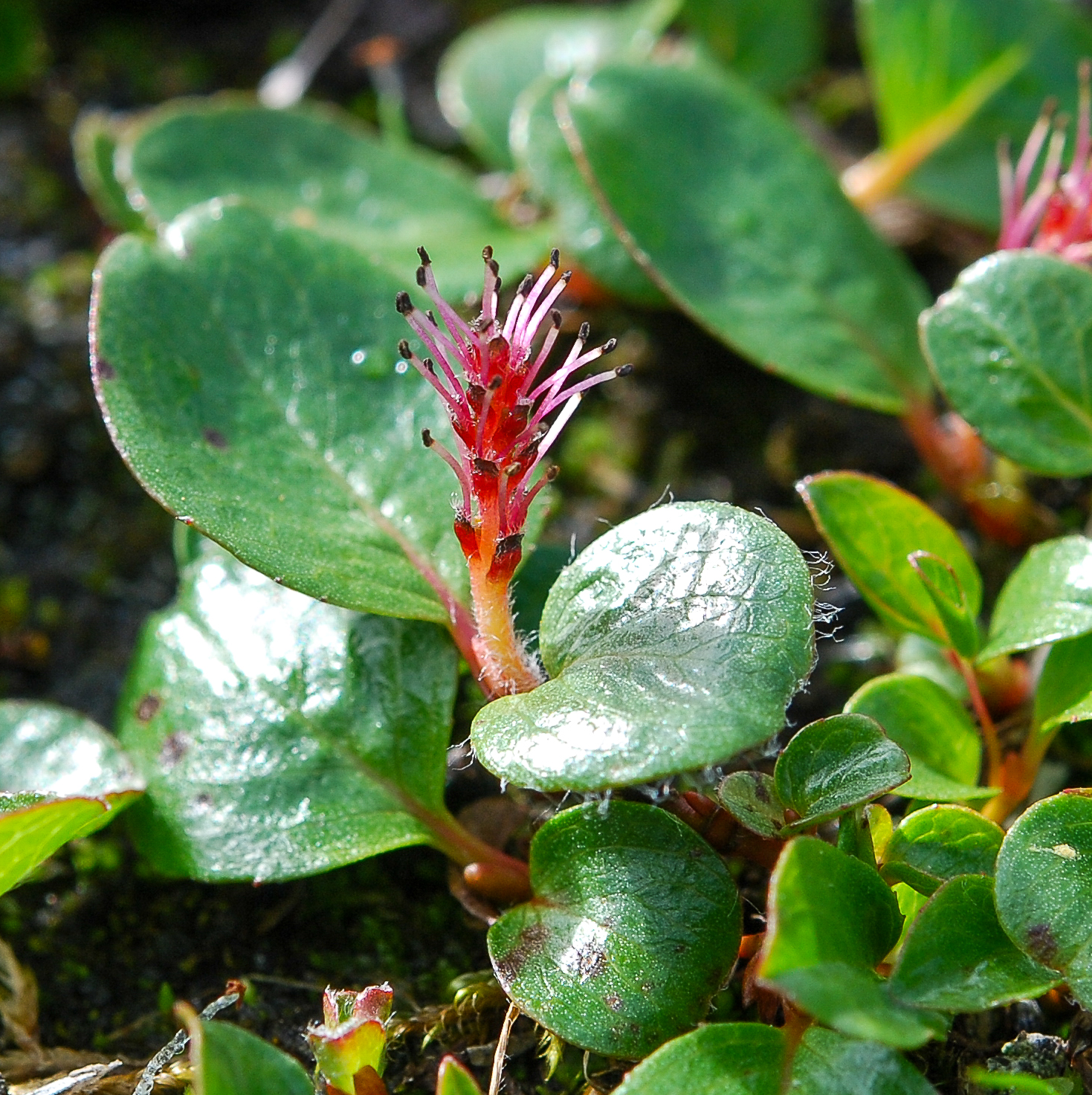 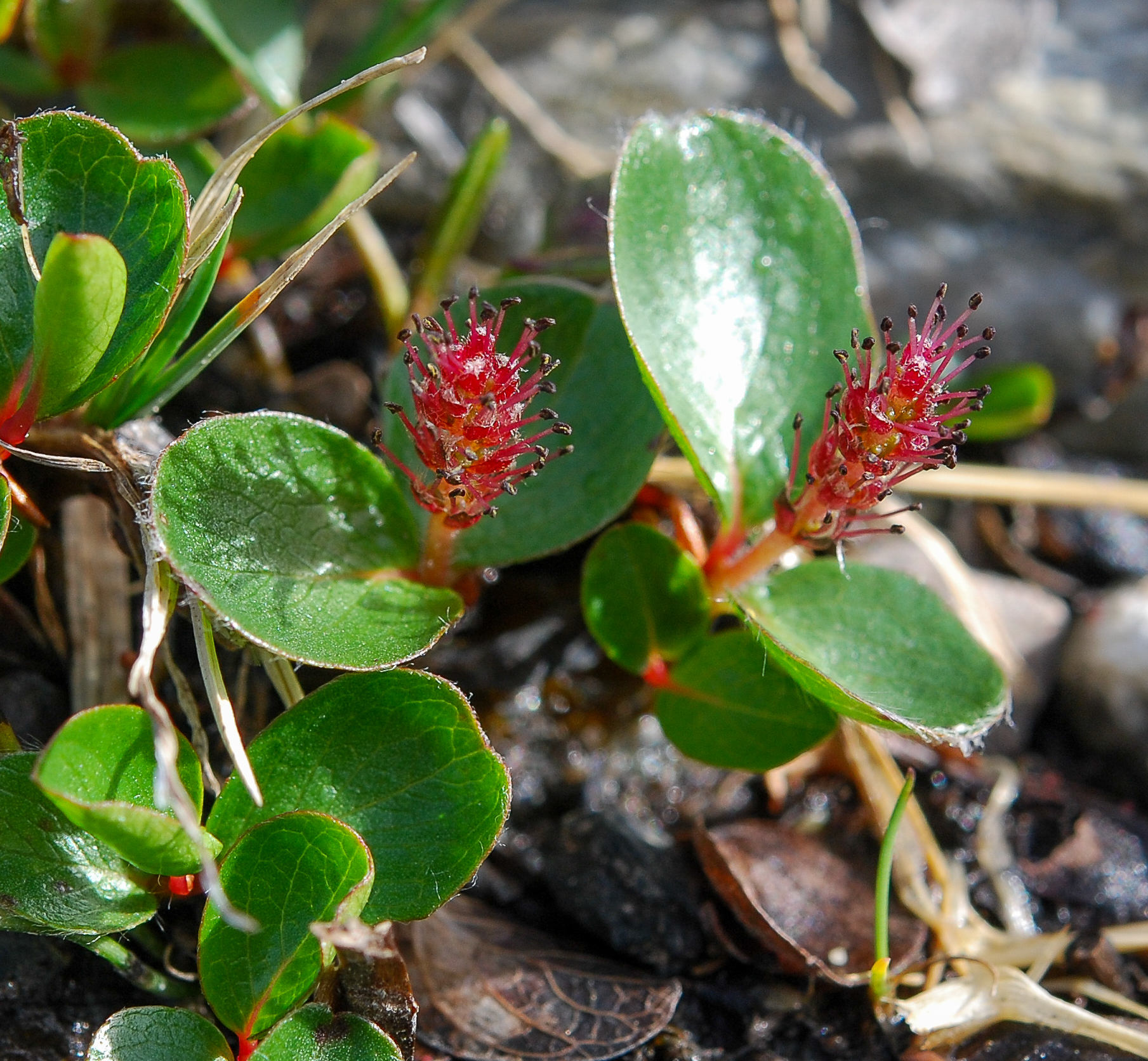 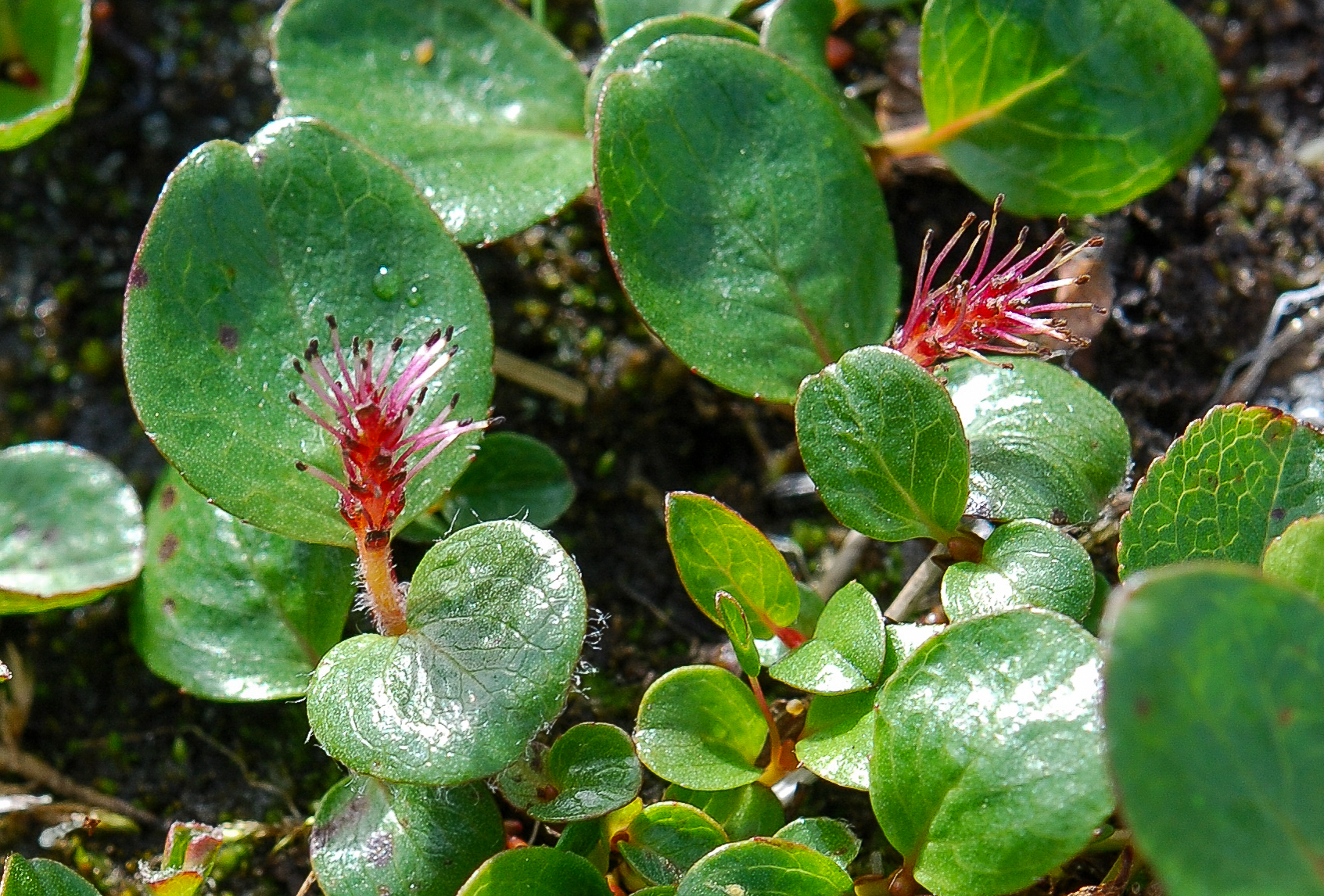 Male inflorescences of S. polaris are small and short, and have short stalks. Anthers are initially red. Filaments are reddish, and carpels dark red. Flowering occurs after the leaves have expaded. 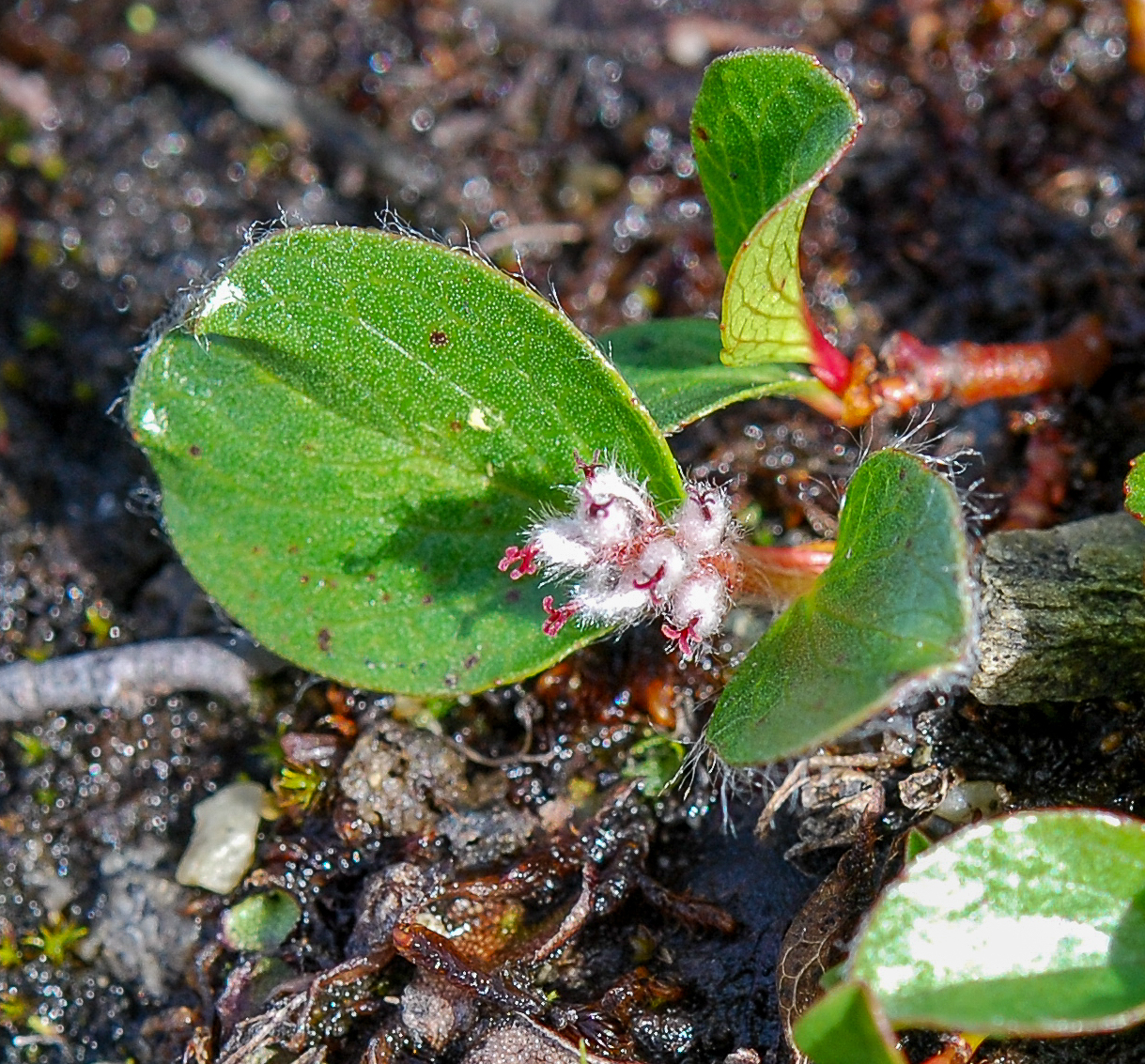 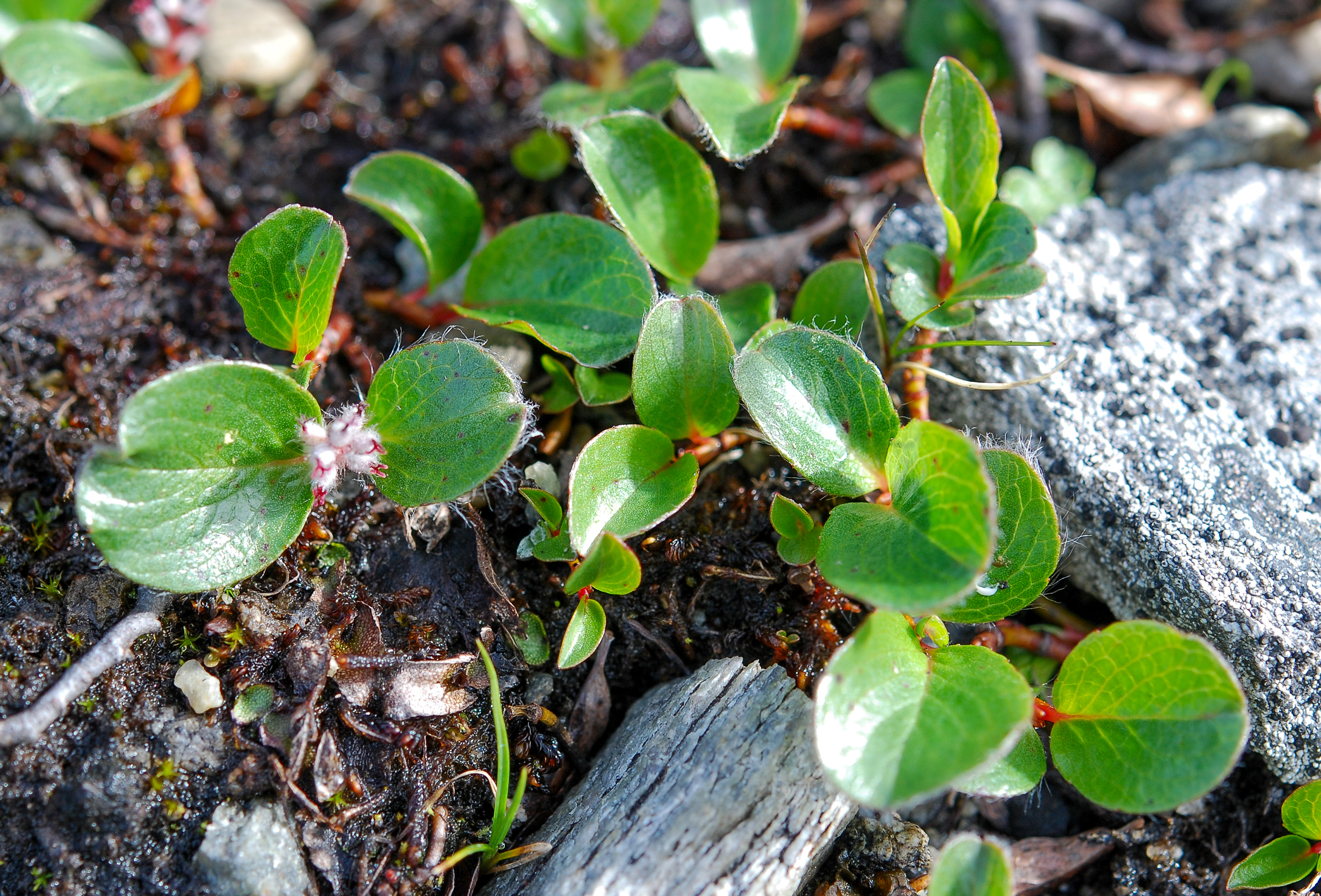 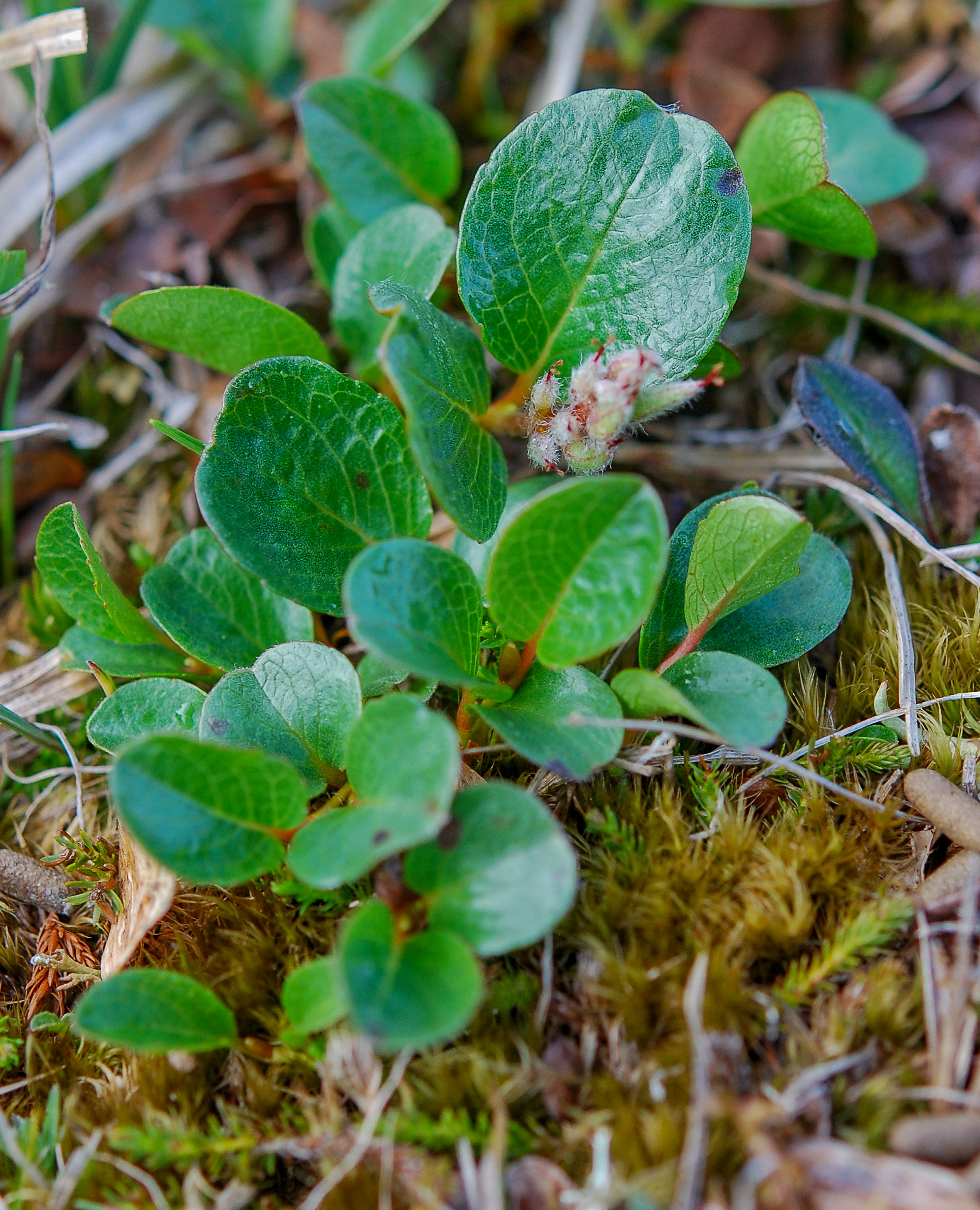 The female inflorescences consist of fewer than 15 individual flowers, and may be positioned on short stalks. Ovaries are densely covered by pale pubescence. Stigmas are red and carpels dark red. Flowering occurs after leaf expansion. 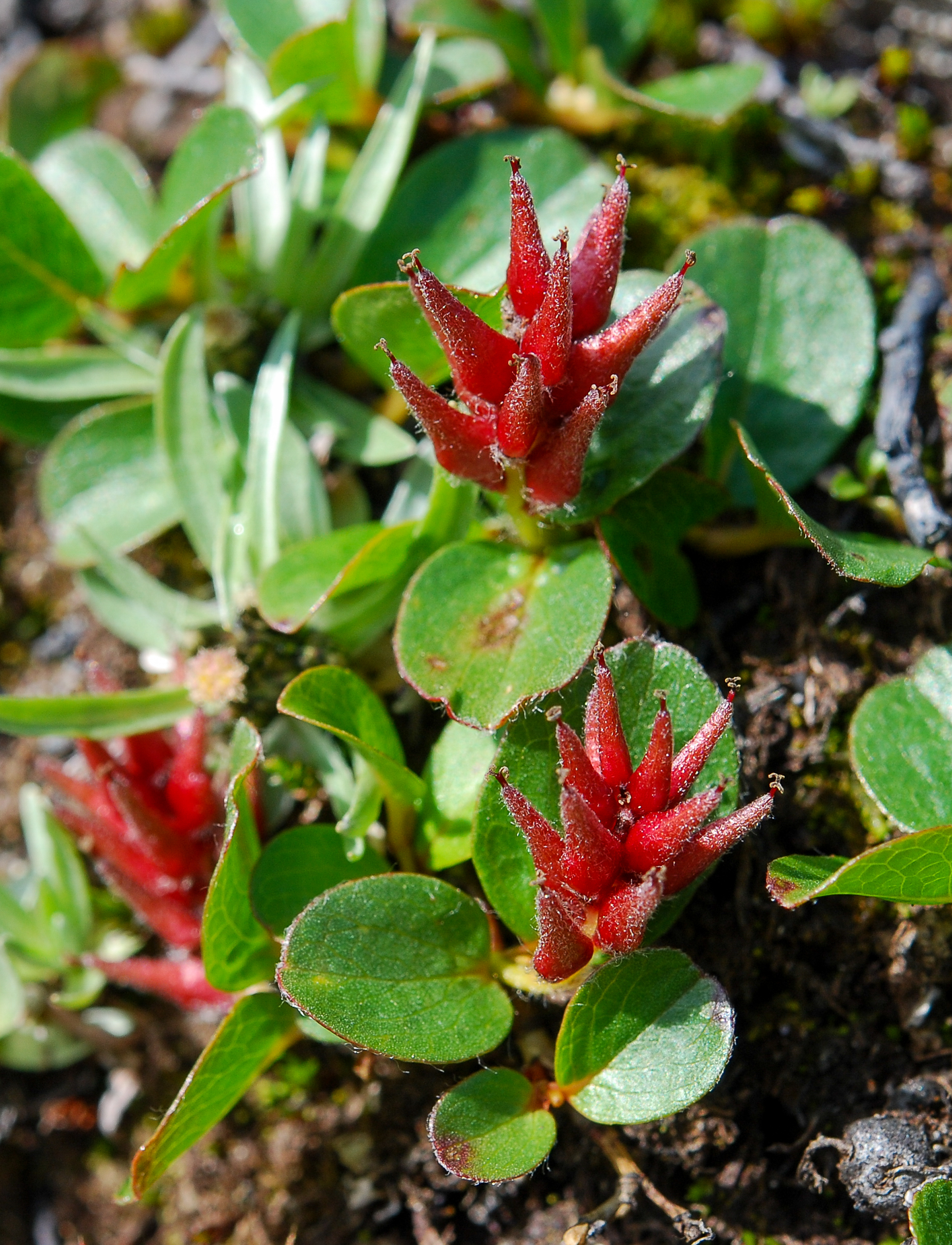 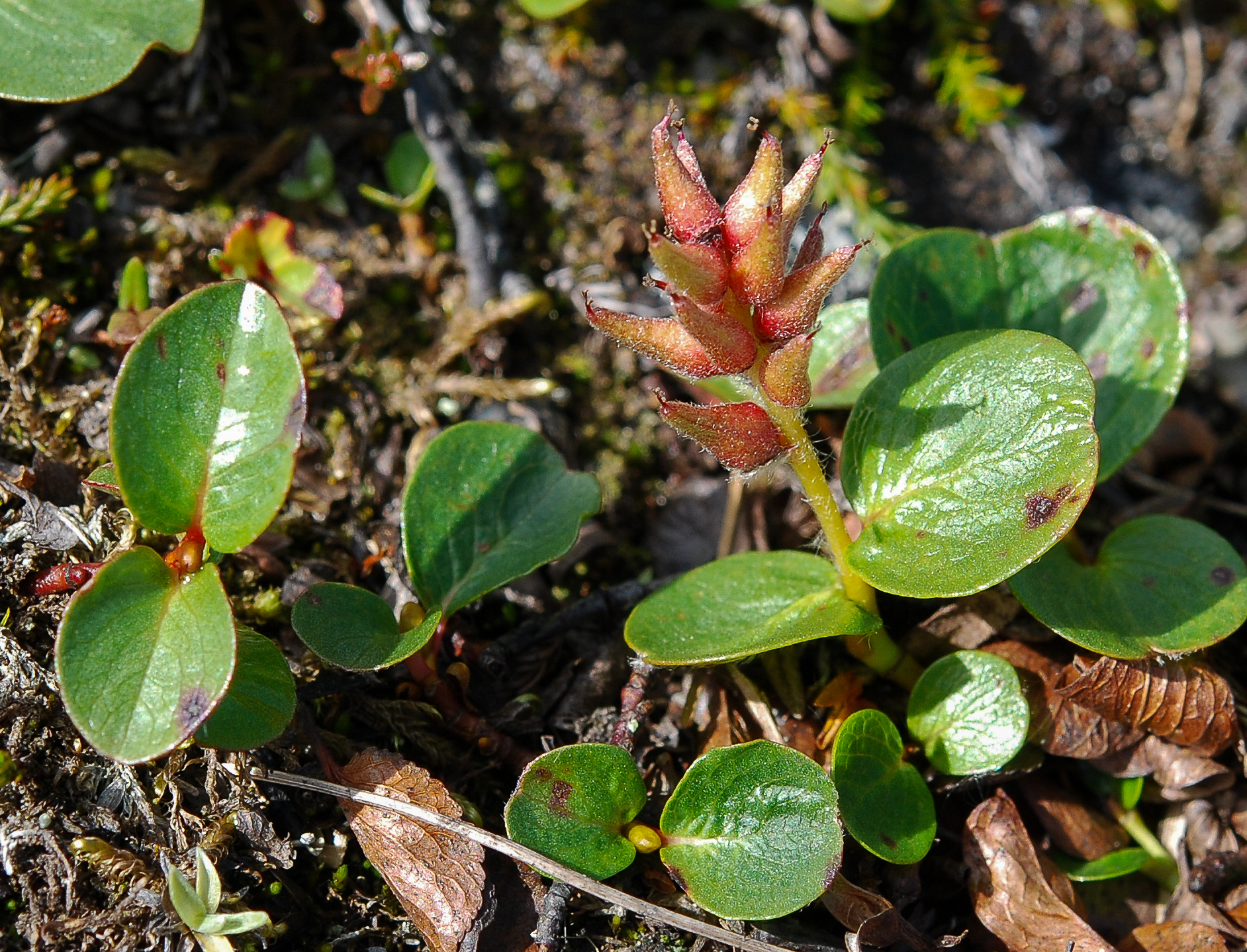 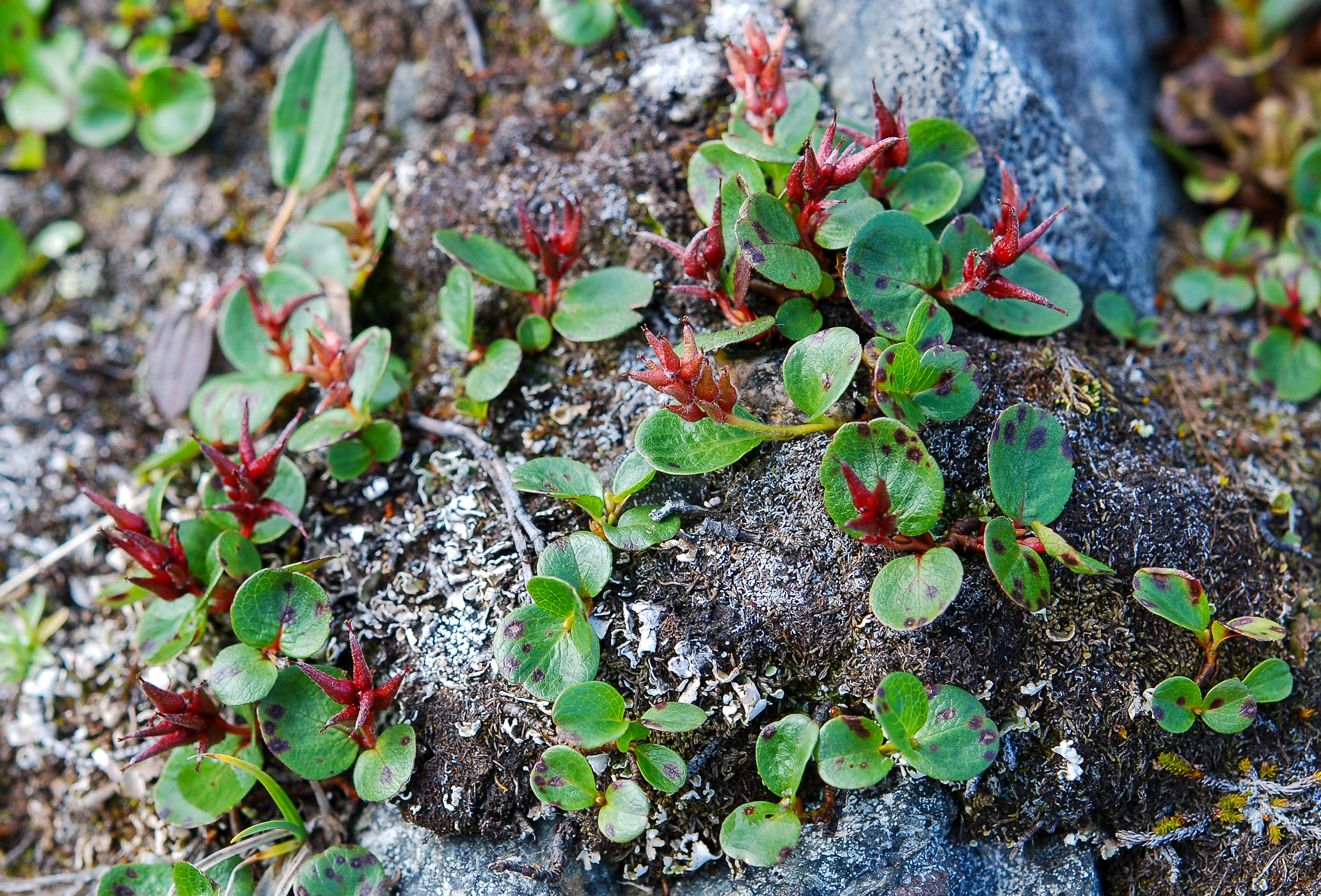 S. polaris catkins are erect and short (with circa 8–15 individual fruits) and typically supported by a short stalk. The fruits are deep red or orange, and are covered by short white pubescence. 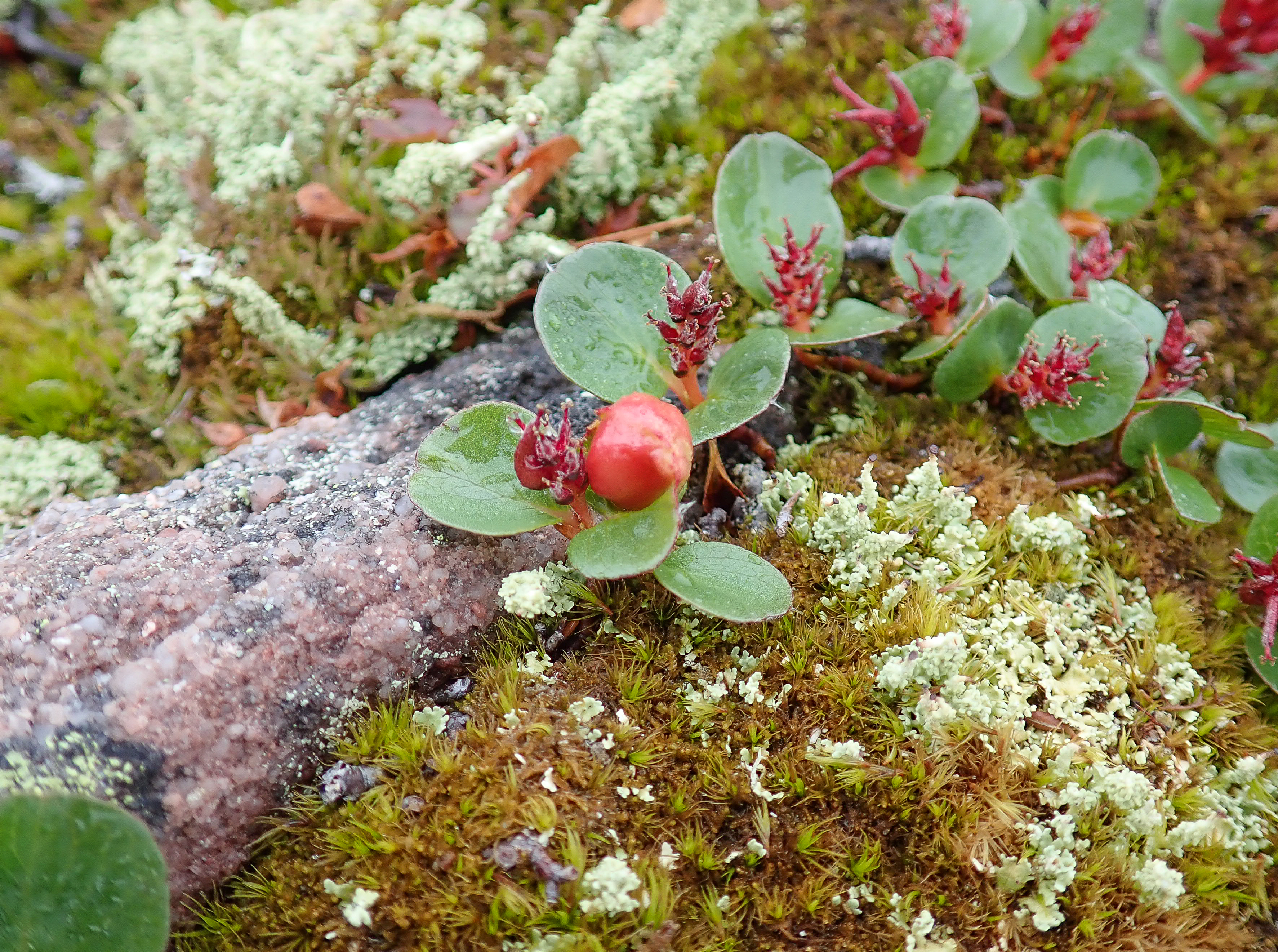 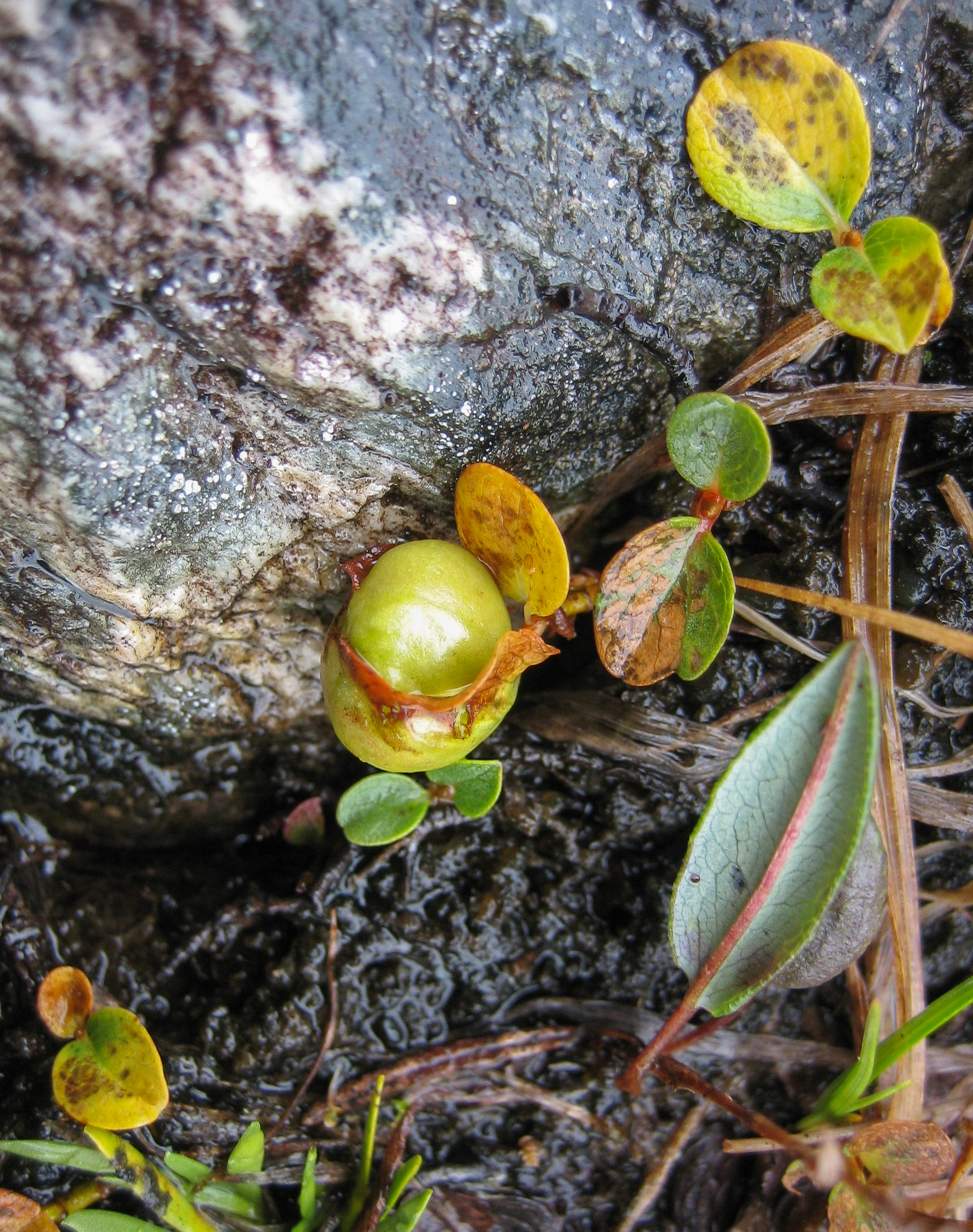 S. polaris grows almost exclusively on calcareous soils, so it is less widely distributed than its closest but ecologically more generalized relative S. herbacea. Typical locations include wet dripping edges of limestone cliffs and fronts of late-melting snowbeds. The creeping and partly subterranean habit of S. polaris means that only a small part of the plants is visible on the soil surface.

Spherical leaf galls of the nematine sawflies Euura (Eupontania) polaris and E. herbaceae are common in some locations, and the two species partly overlap in their distributions. Catkin-feeding sawflies are also present, but otherwise the herbivore communities of dwarf willows have been studied very little. The insect pollinator community of S. polaris is likewise poorly known, and the species may be partly wind-pollinated.