Salix myrsinites L. is a low-growing shrub that rarely grows more than circa 0.5 metres tall. It has a very characteristic appearance: the thick, small leaves are shining green on both sides, and have sharp serration along the edges. The leaves have a very strong taste due to their high concentrations of phenolic defensive compounds called salicylates. S. myrsinites grows on open nutrient-rich swamps and on limestone areas on fjells, often at sites with flowing water. Its distribution area encompasses the northern and northwestern parts of Fennoscandia as well as northeastern Russia, but the closely related S. breviserrata occurs on the mountains of Central and Southern Europe. 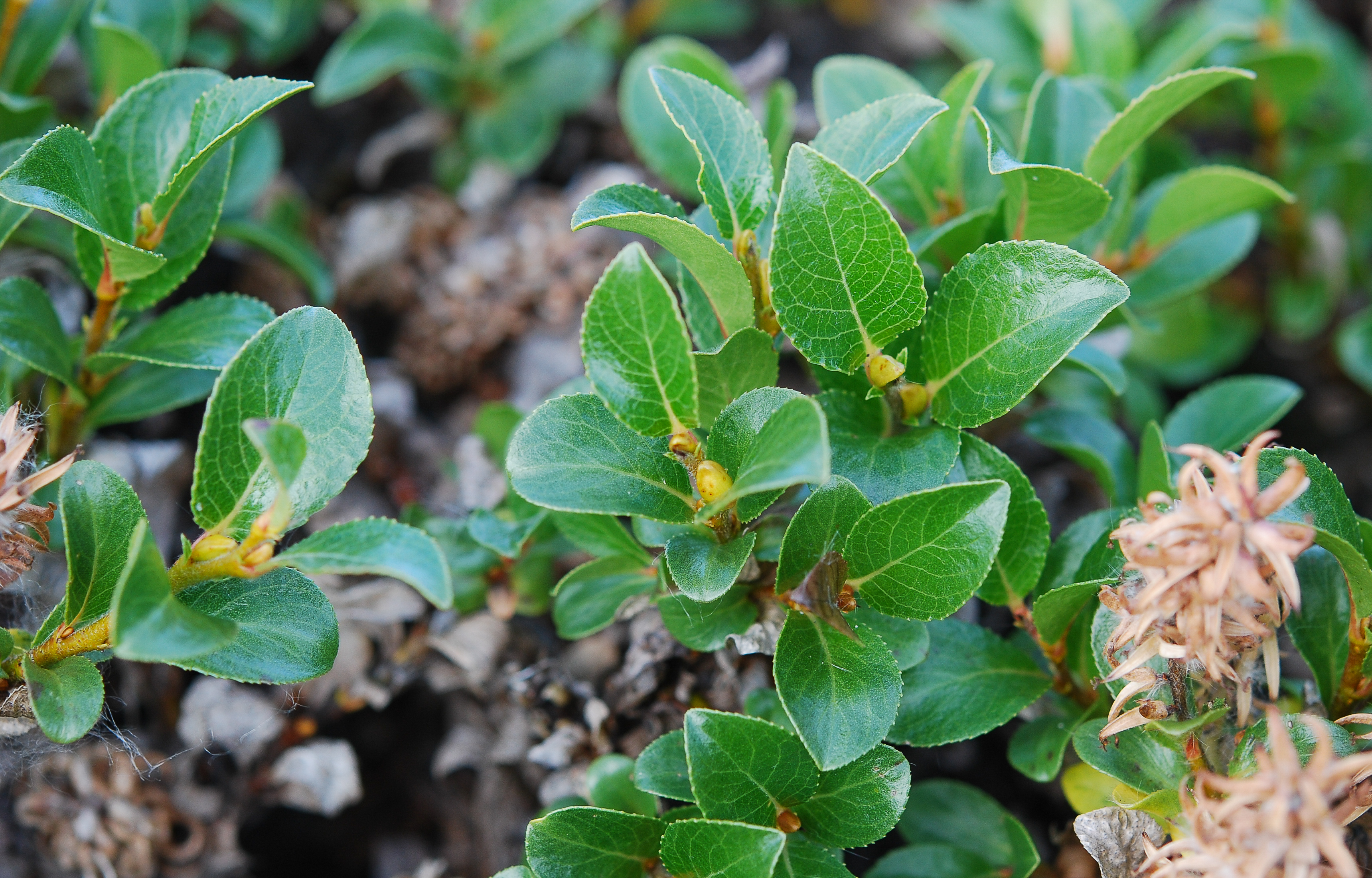 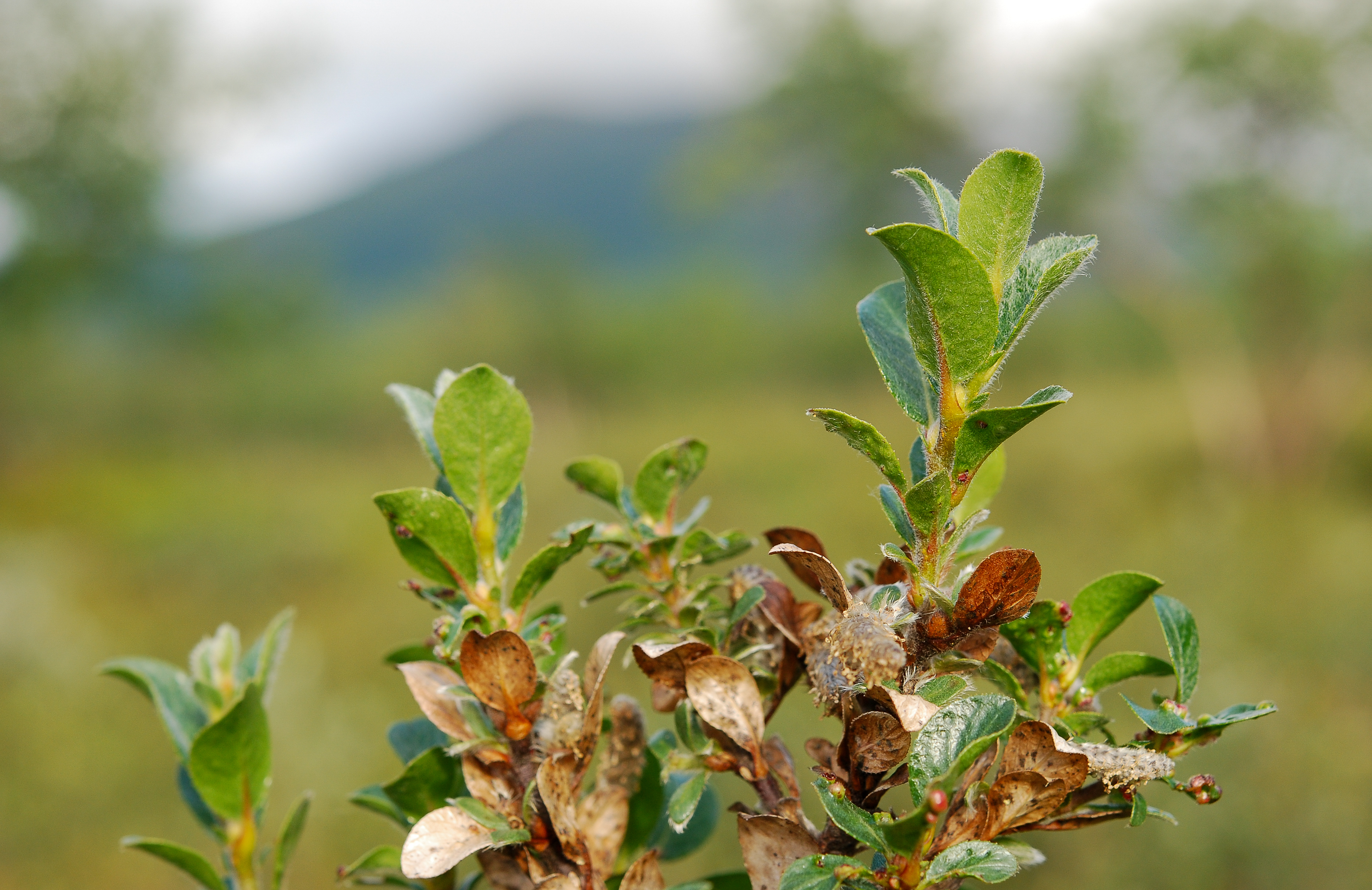 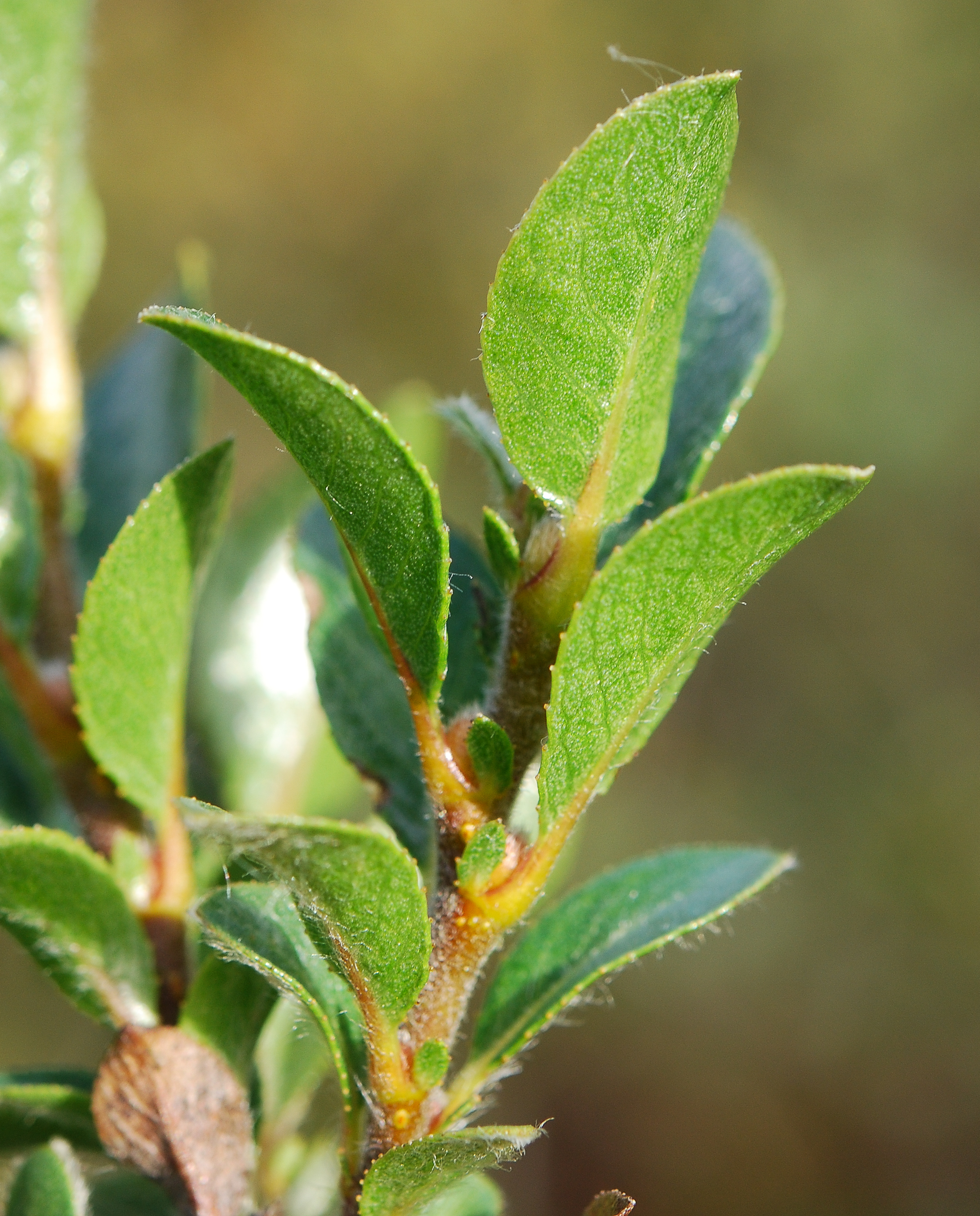 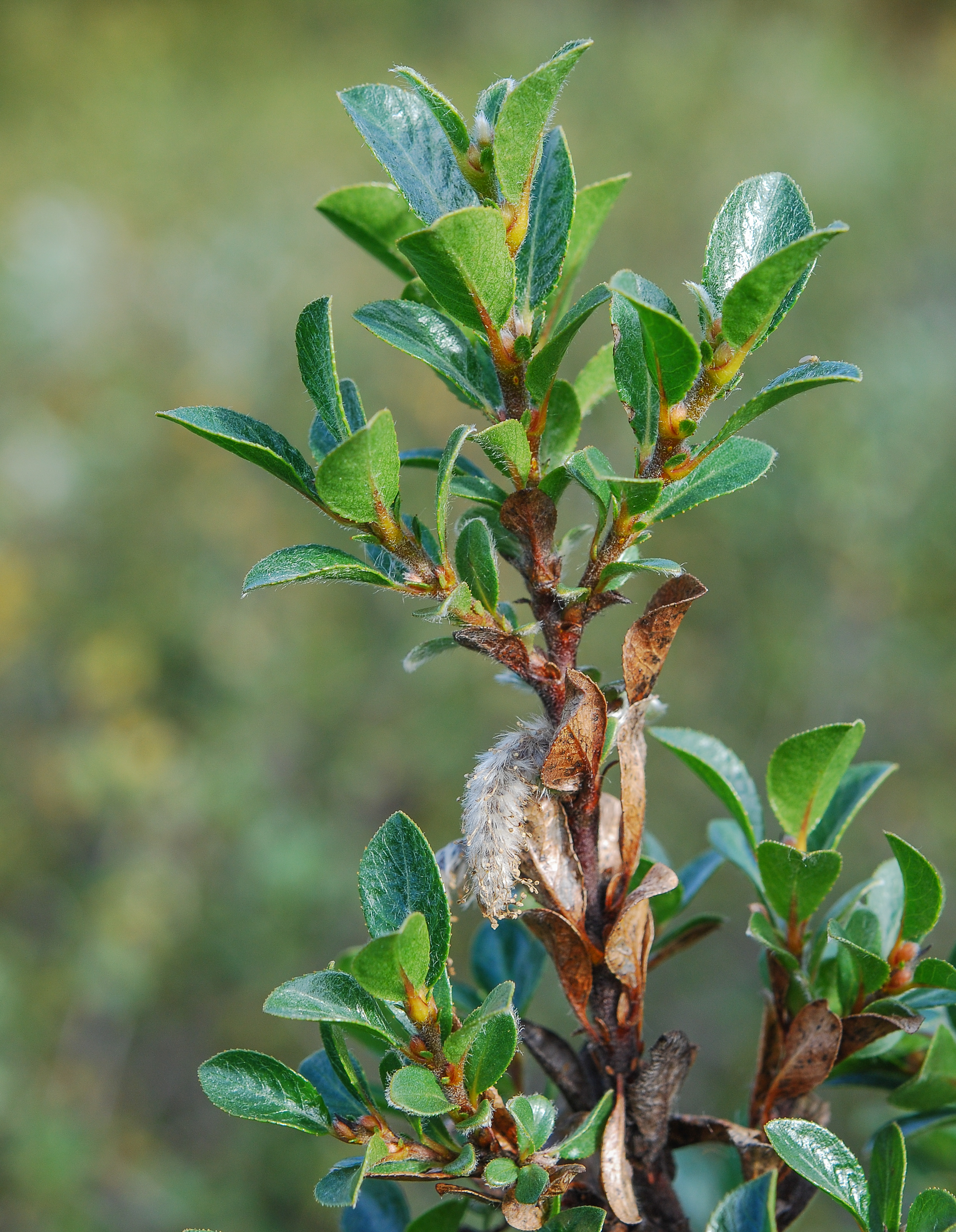 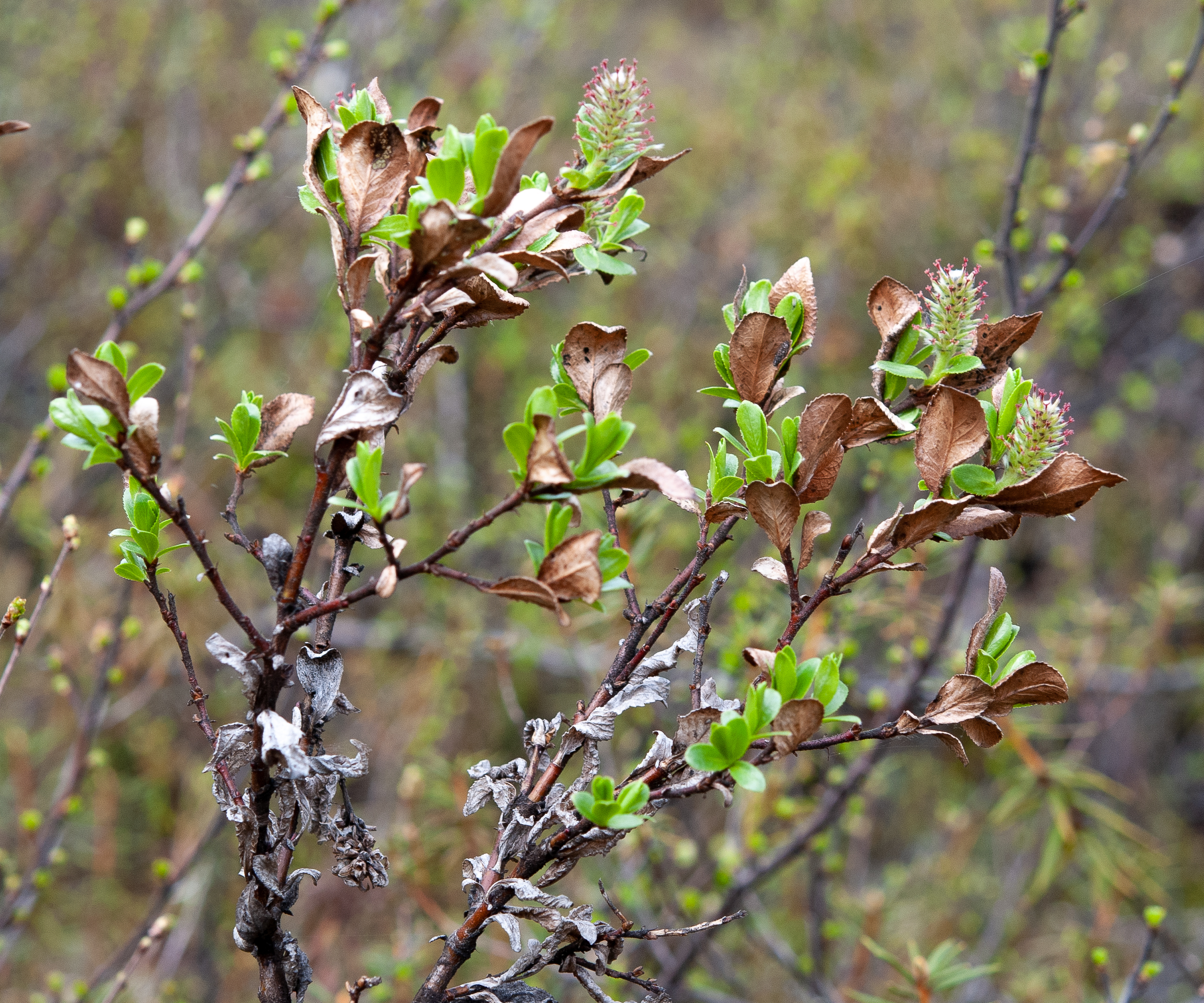 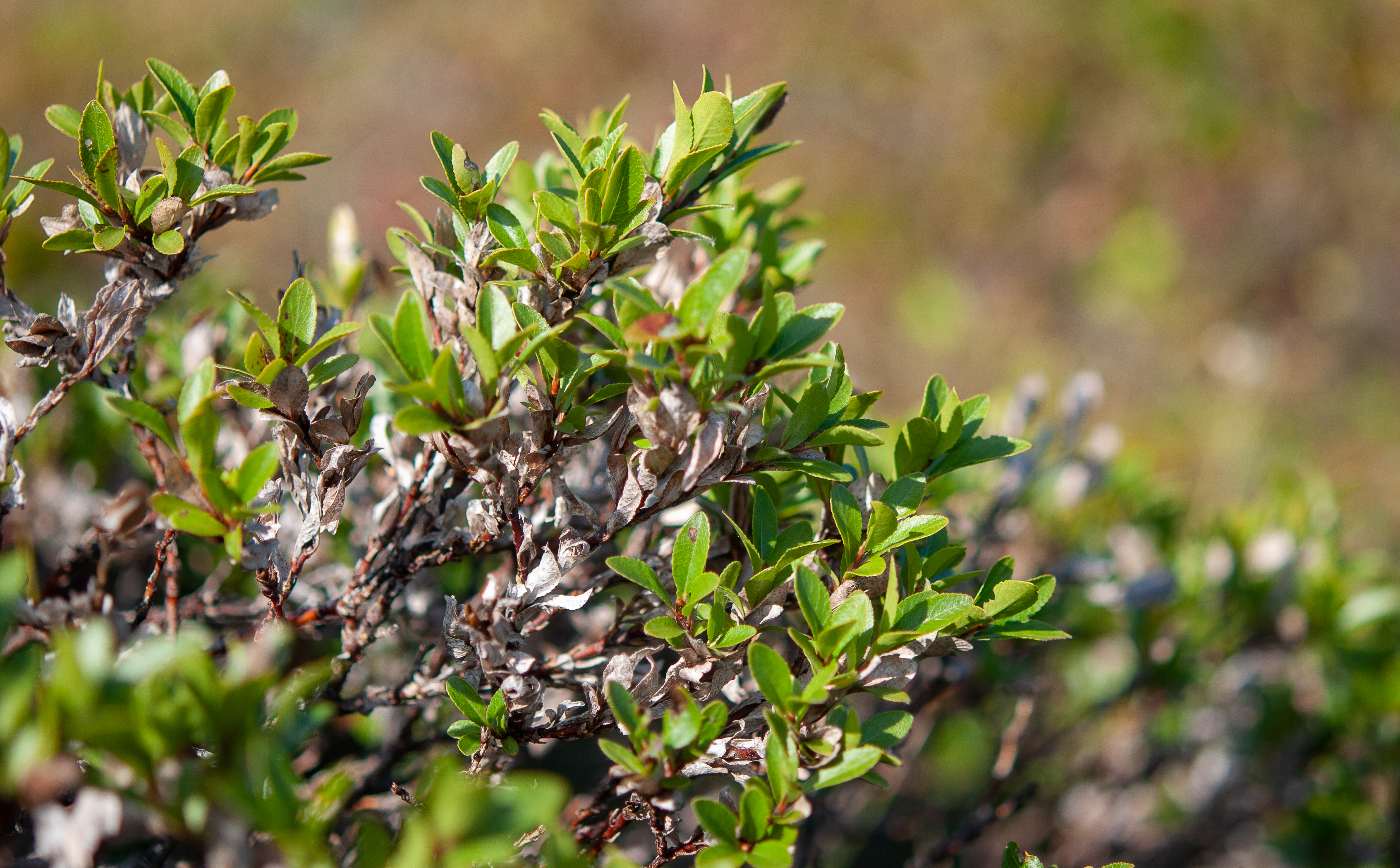 The broad, pointy leaves of S. myrsinites are thick and typically less than two centimetres long, with both the upper and lower surface being shining green. However, especially young leaves may be covered by long, sparse hairs. The leaves have strong and regular serration along the edges, and are often bent downward lengthwise. Due to the presence of high concentrations of salicylates, the leaves have a bitter taste, which can be felt with a short delay.

Narrow, serrated stipules may be present next to the rounded buds on thick and typically hairy shoots. Current-year shoots are green to reddish-brown, older branches are dark grey or brown. The dry leaves of the previous summer remain on the branches through the winter and next growing season, giving the plants a shaggy appearance. 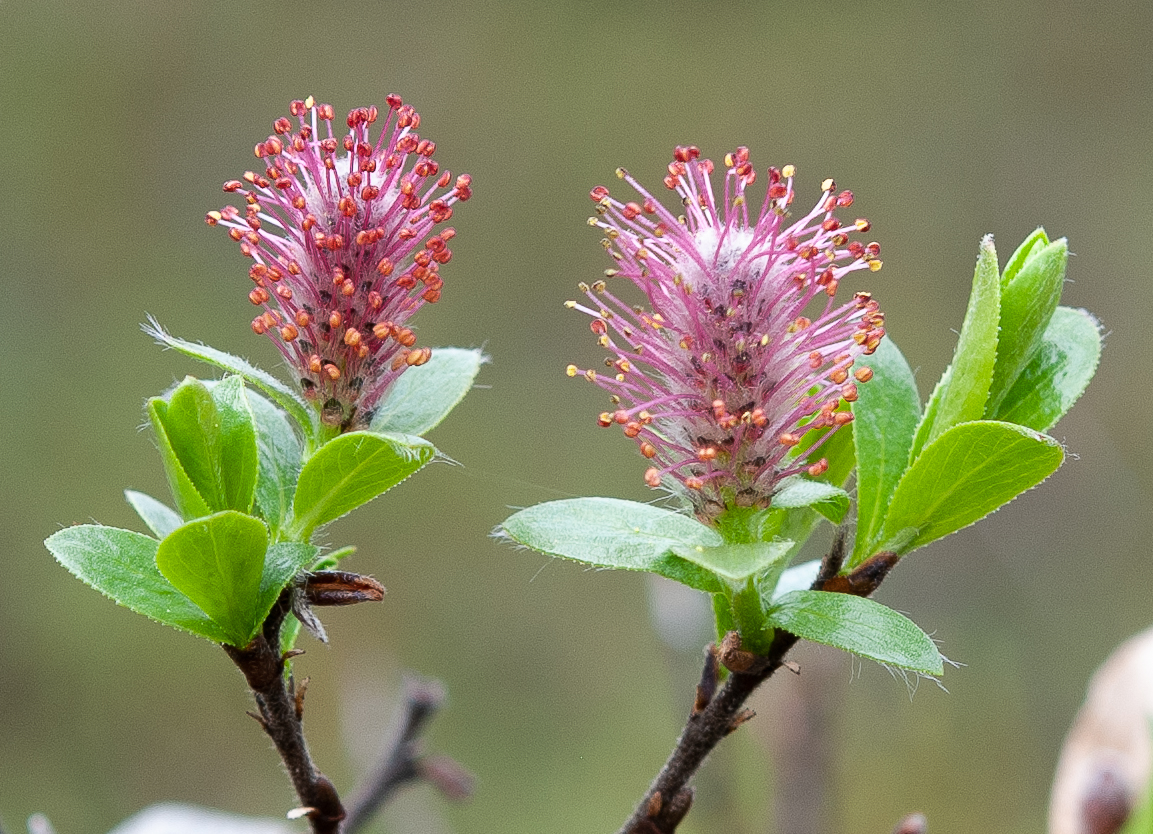 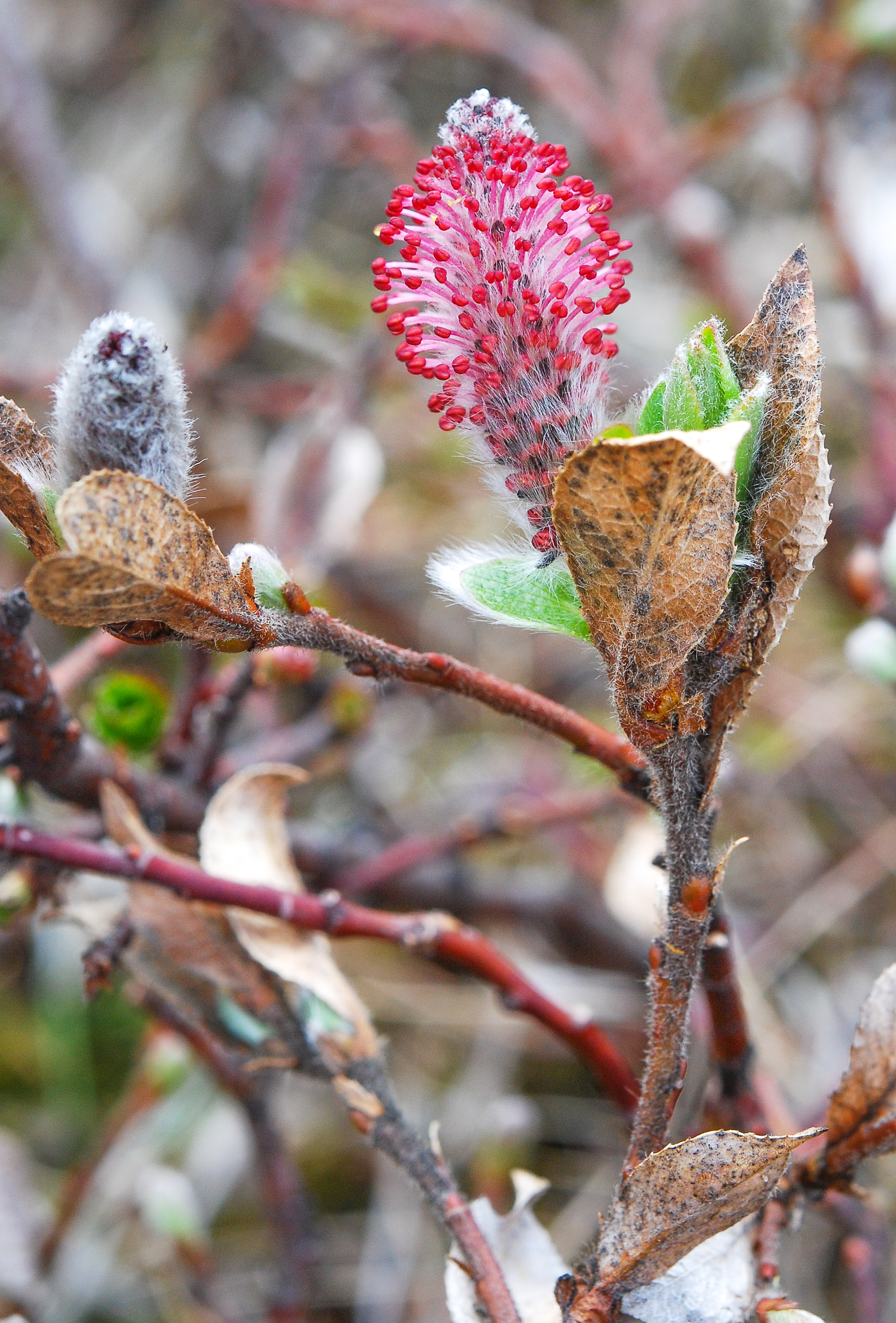 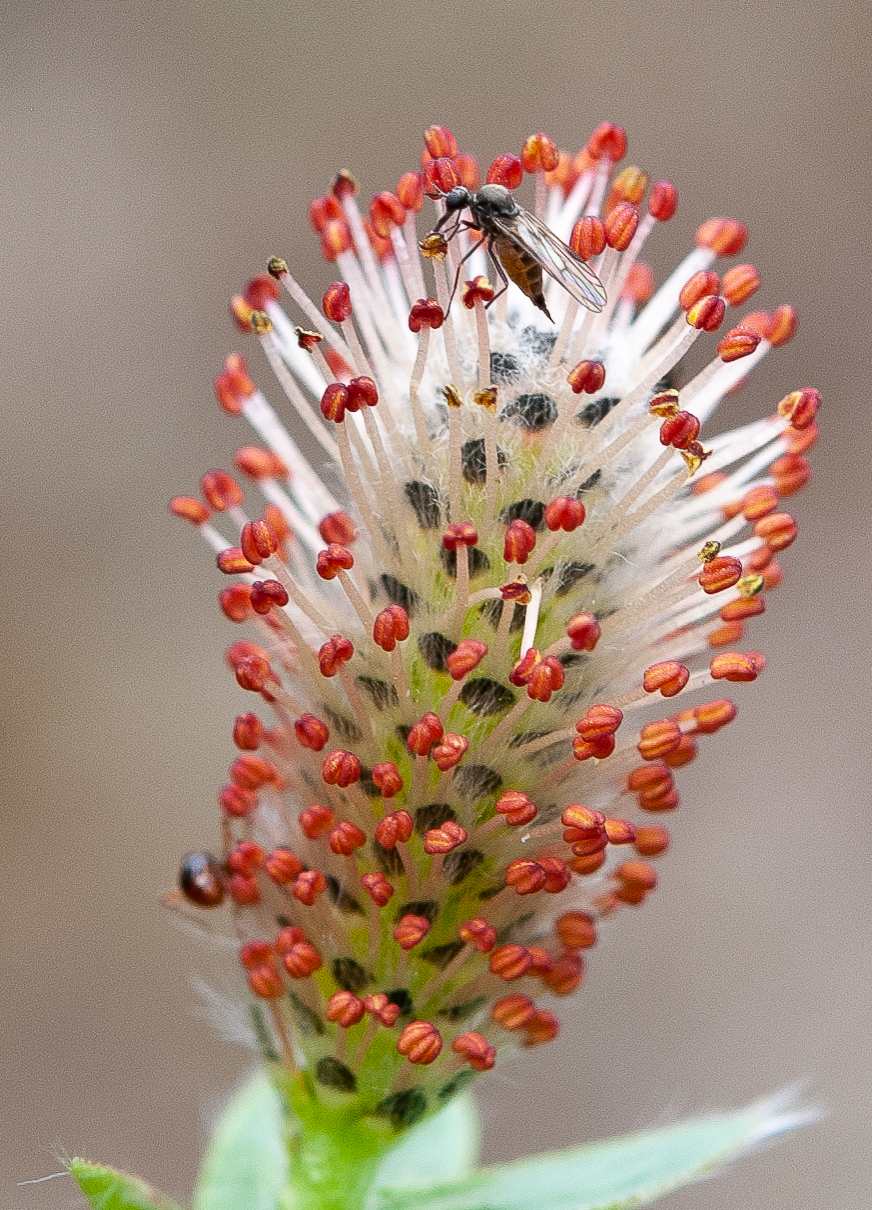 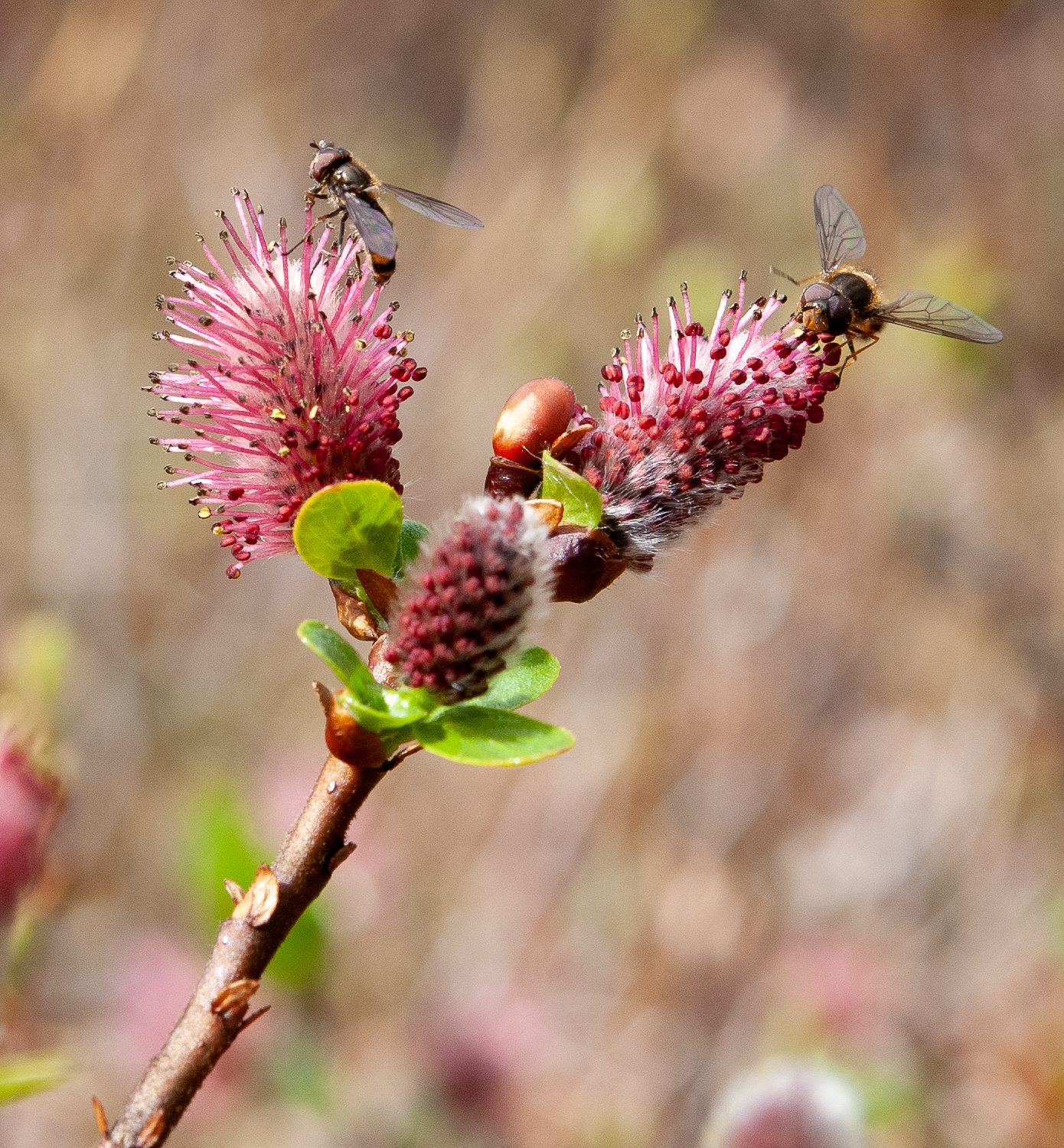 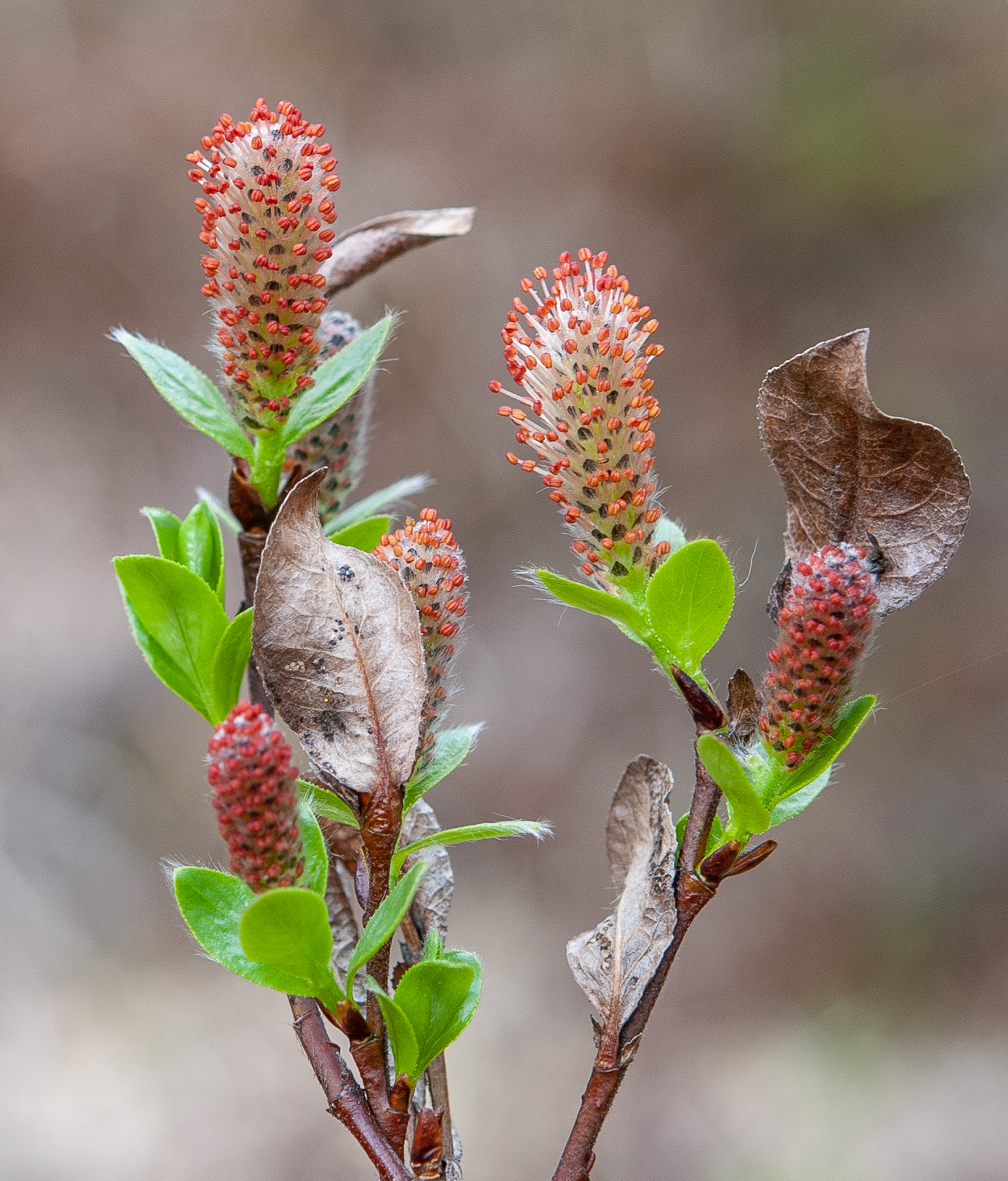 The comparatively short male inflorescences of S. myrsinites are generally reddish because of the intensively red anthers of flowers; anther filaments may be reddish or white. Bracts are black or dark red. Flowering begins during leafburst, and the inflorescences are situated at the tips of short stalks with a few medium-sized leaves. 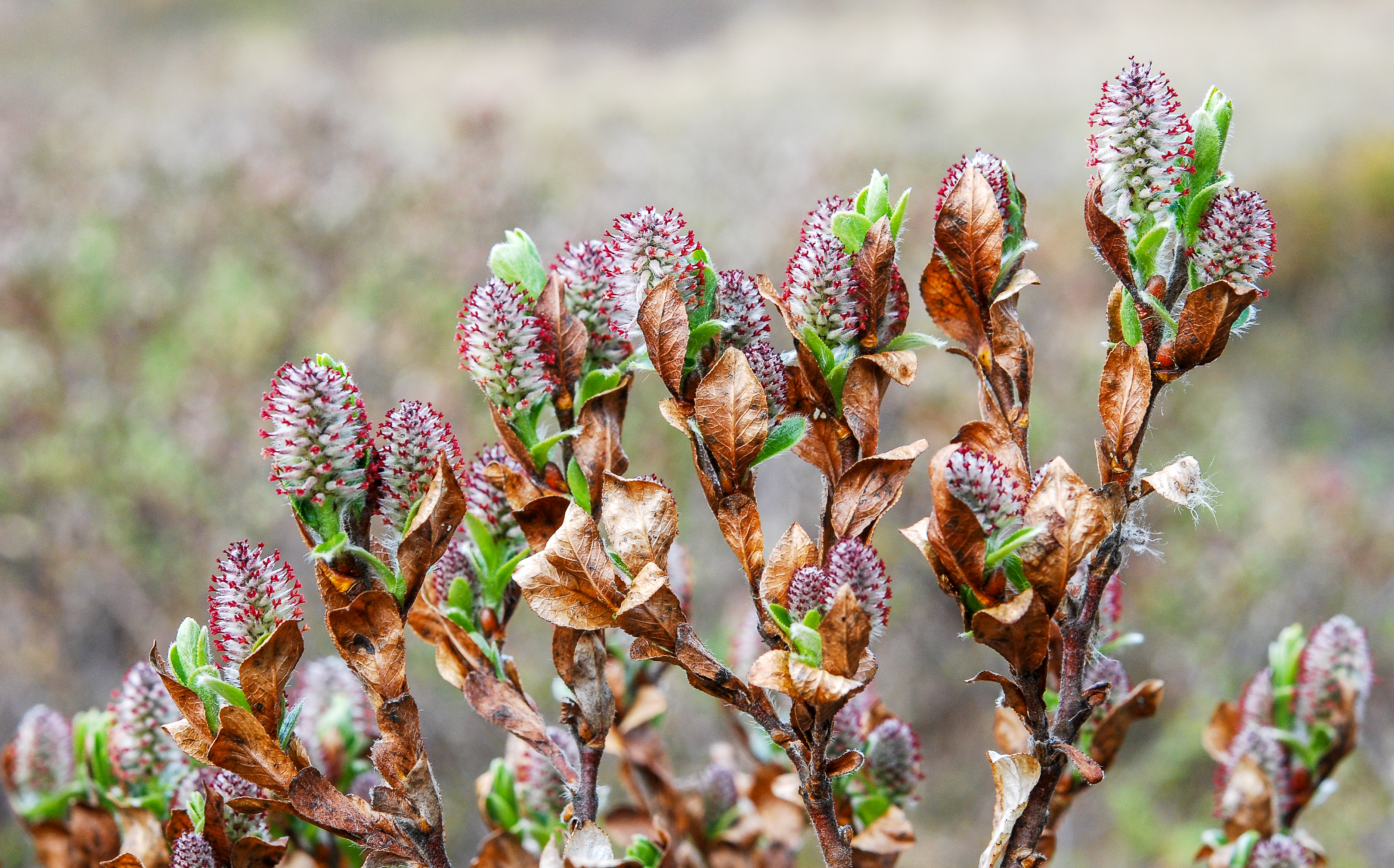 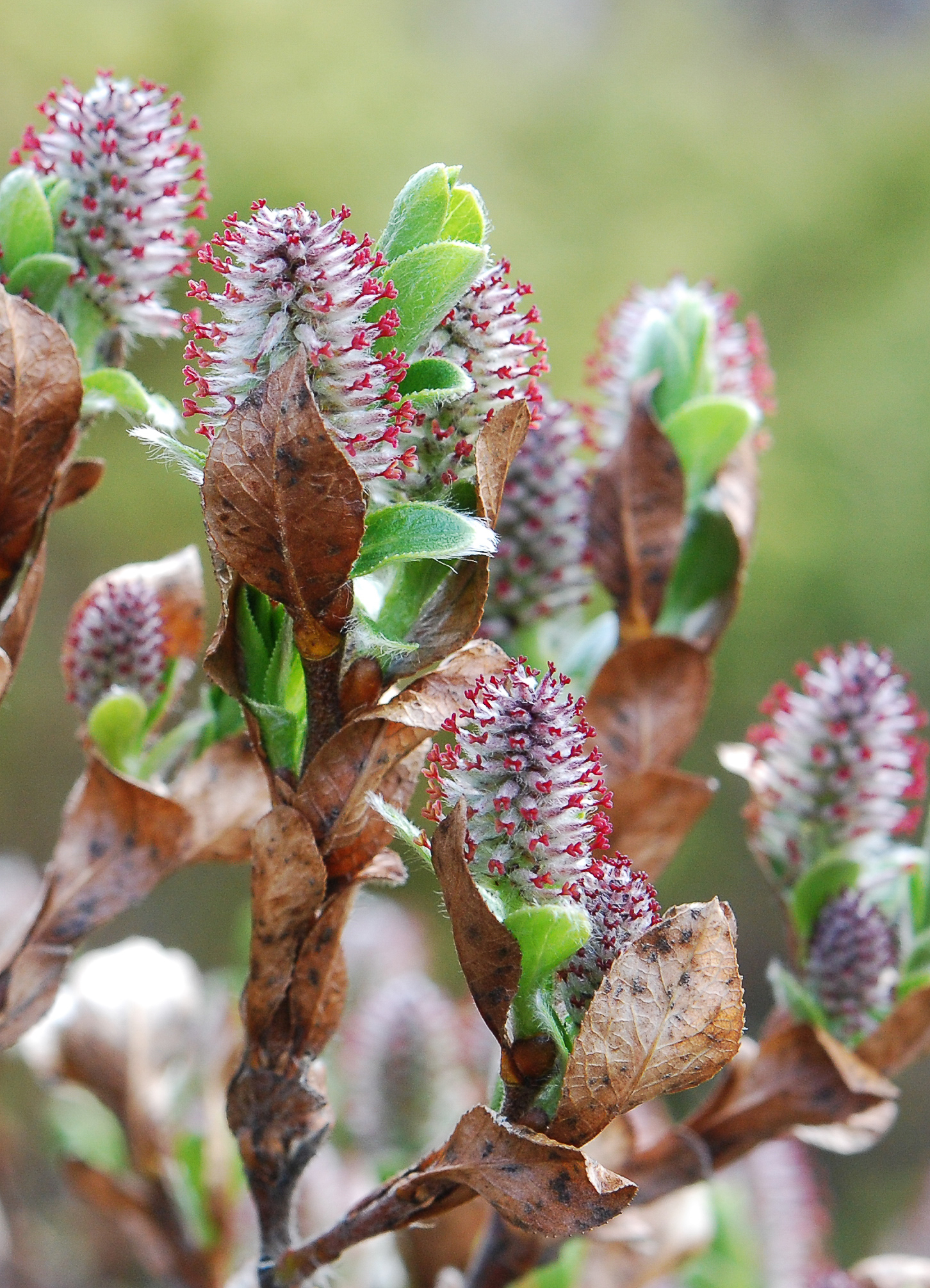 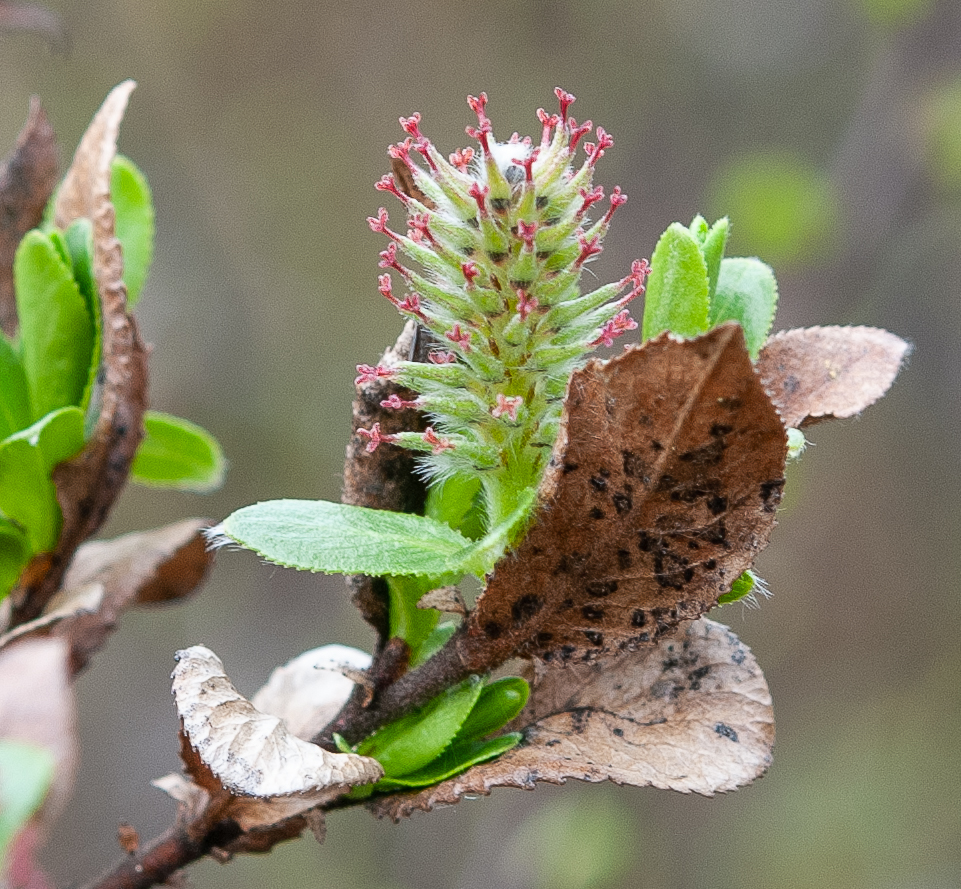 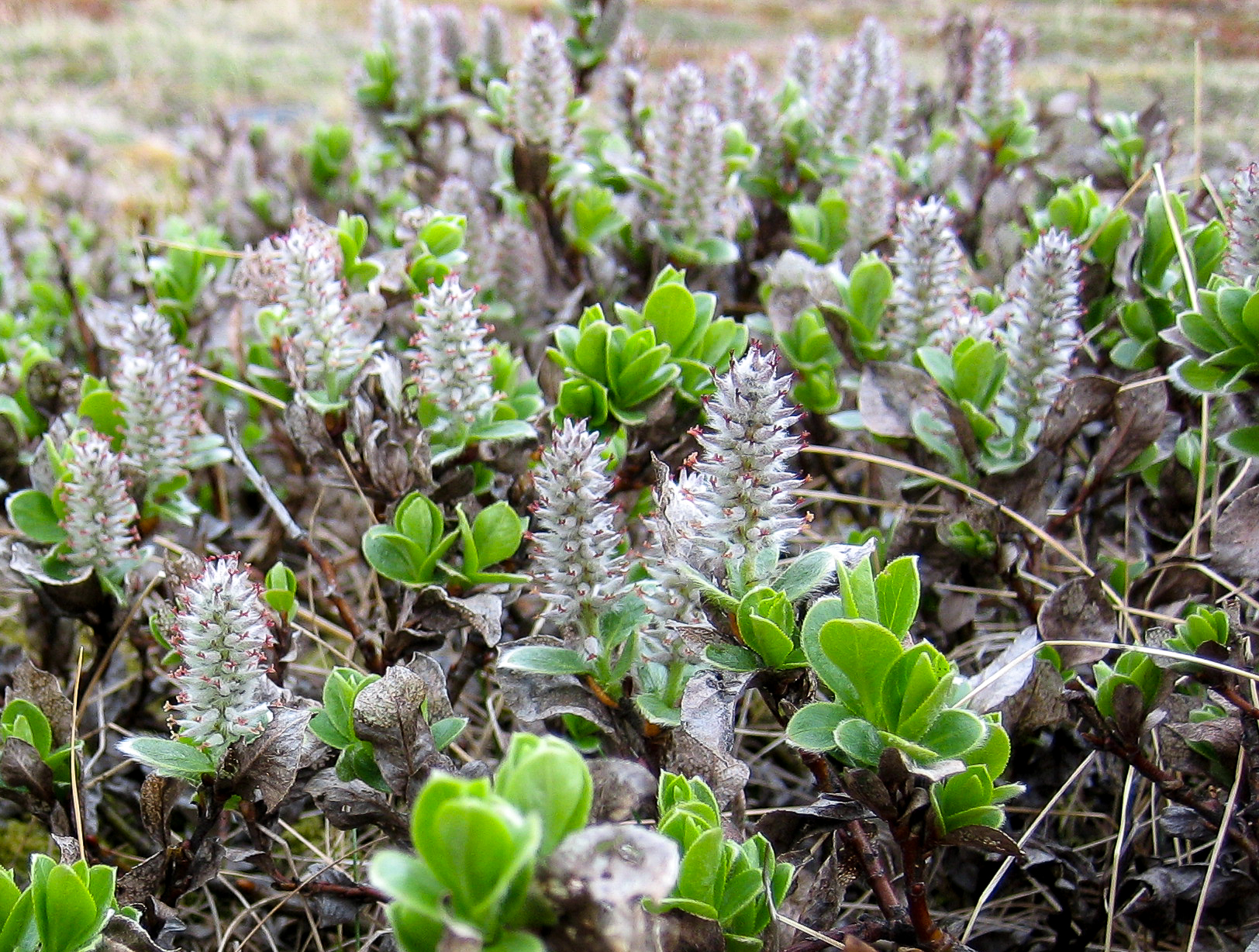 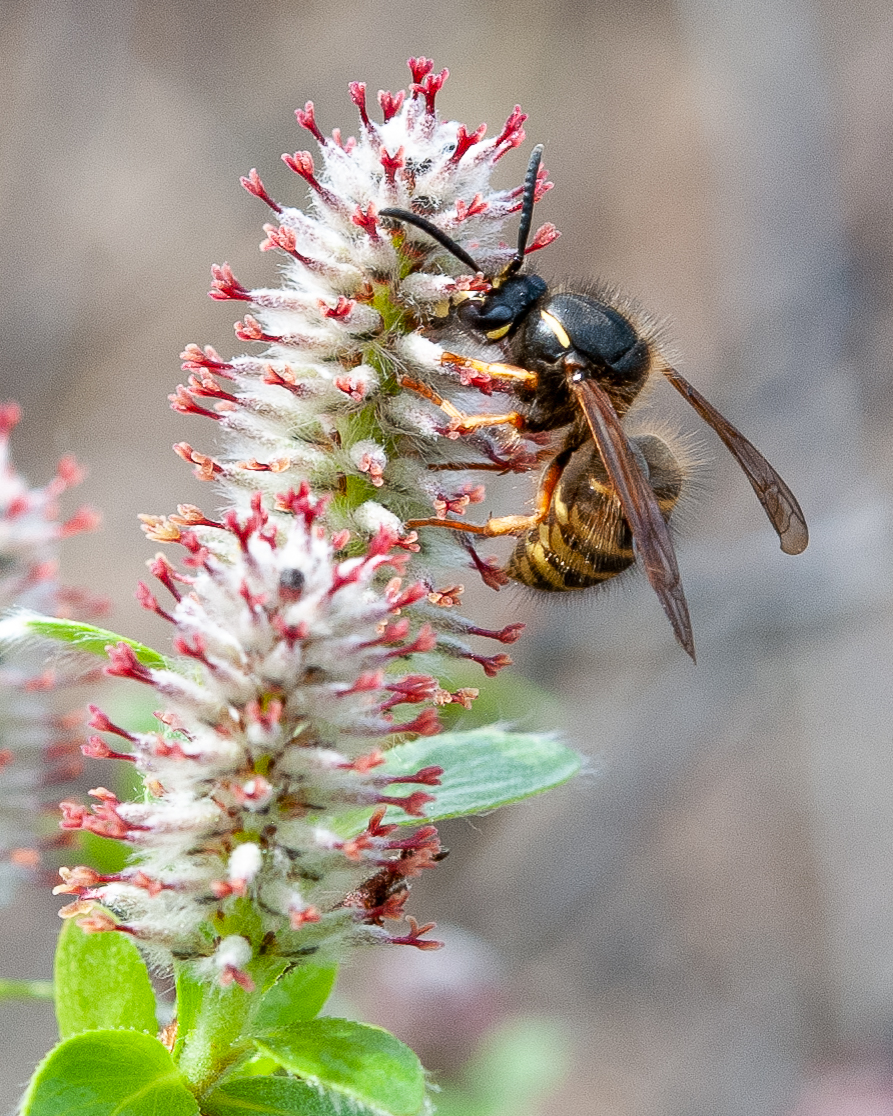 Individual flowers along S. myrsinites female inflorescences have thin ovaries covered by thick grey pubescence, which, in combination with the dark bracts and the bright red styles and stigmas, gives the inflorescences a beautifully characteristic look. Inflorescences of females develop during leafburst, on average slightly later than those of males. The inflorescences are supported by short stalks with a few medium-sized leaves. 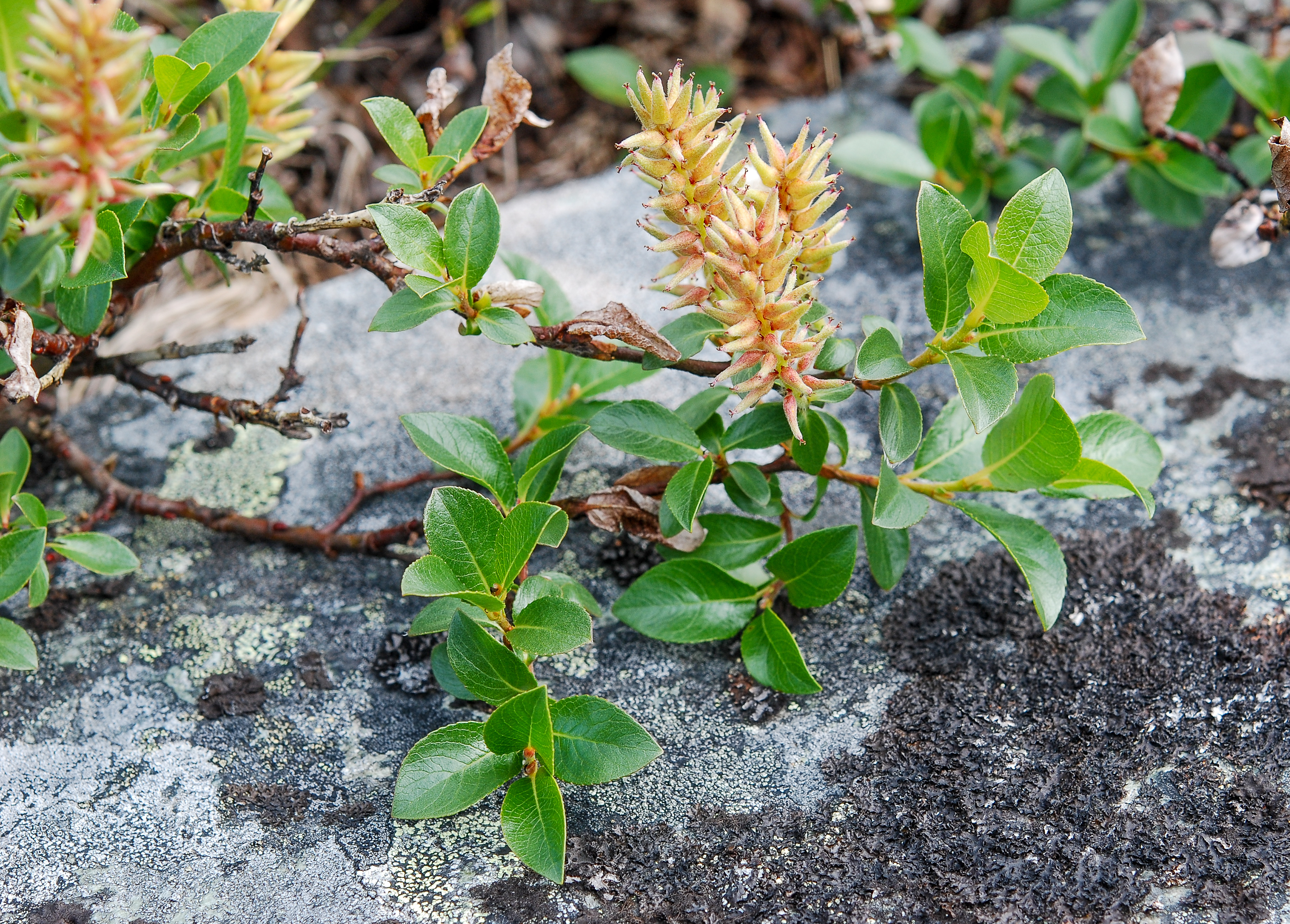 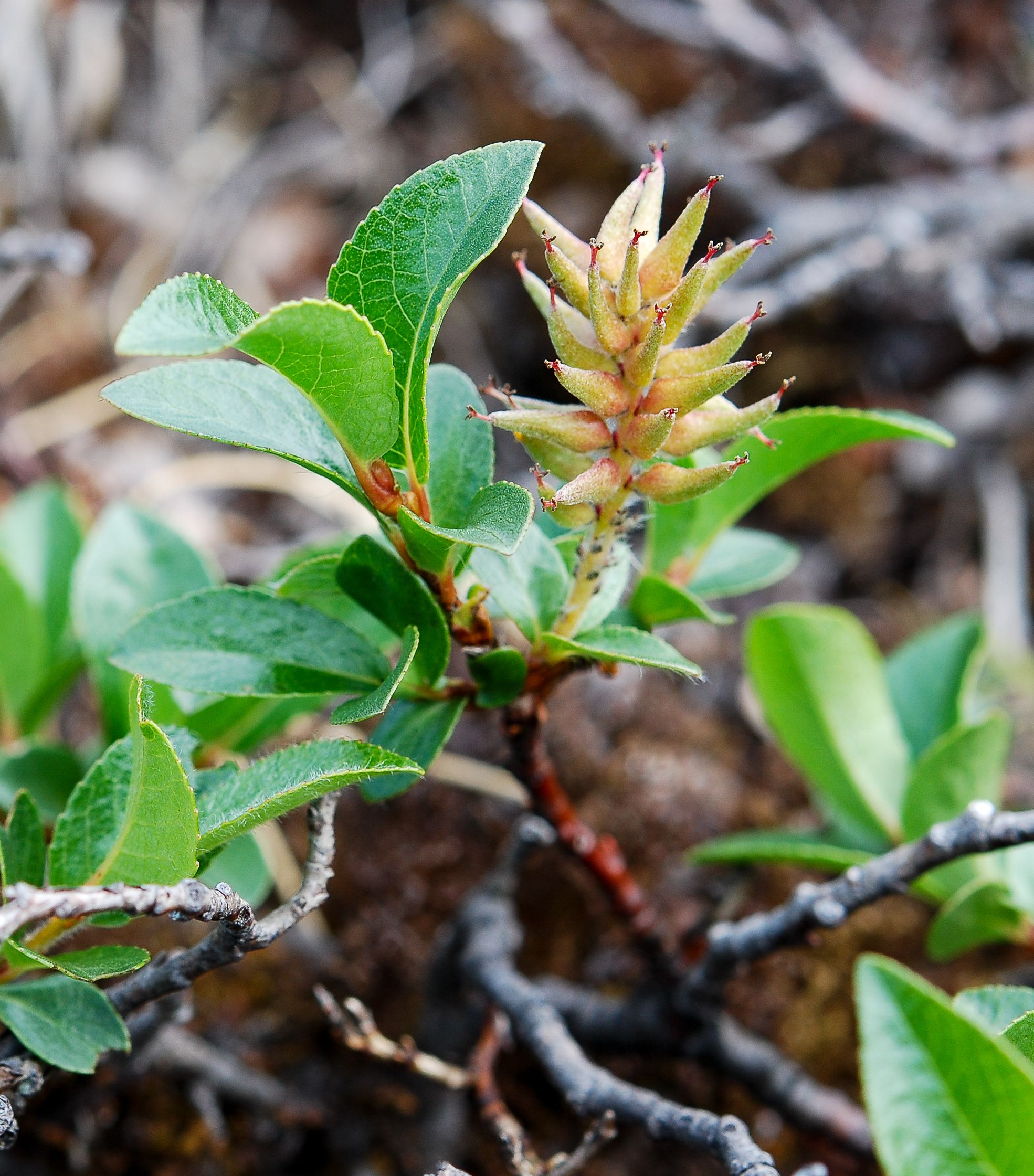 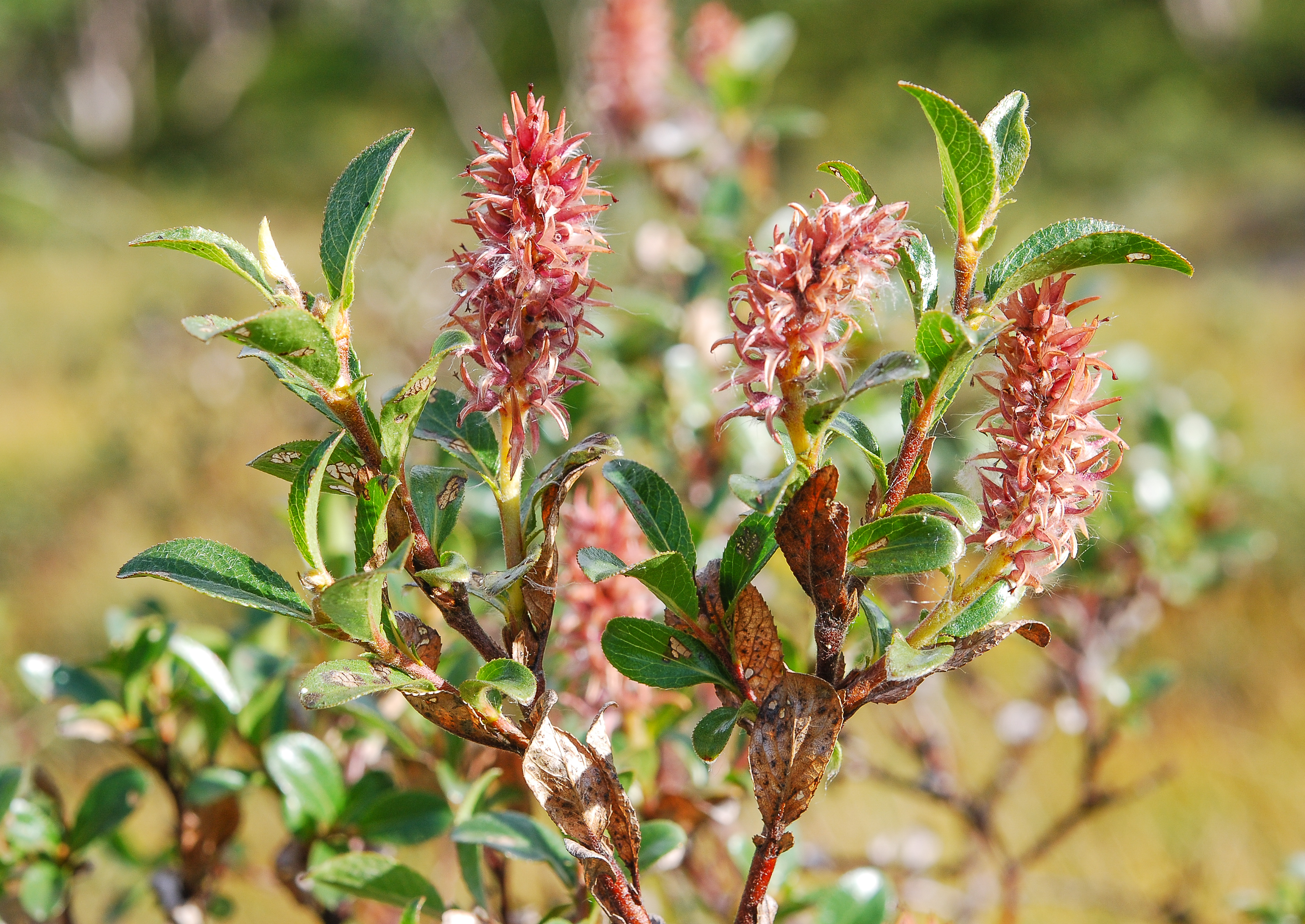 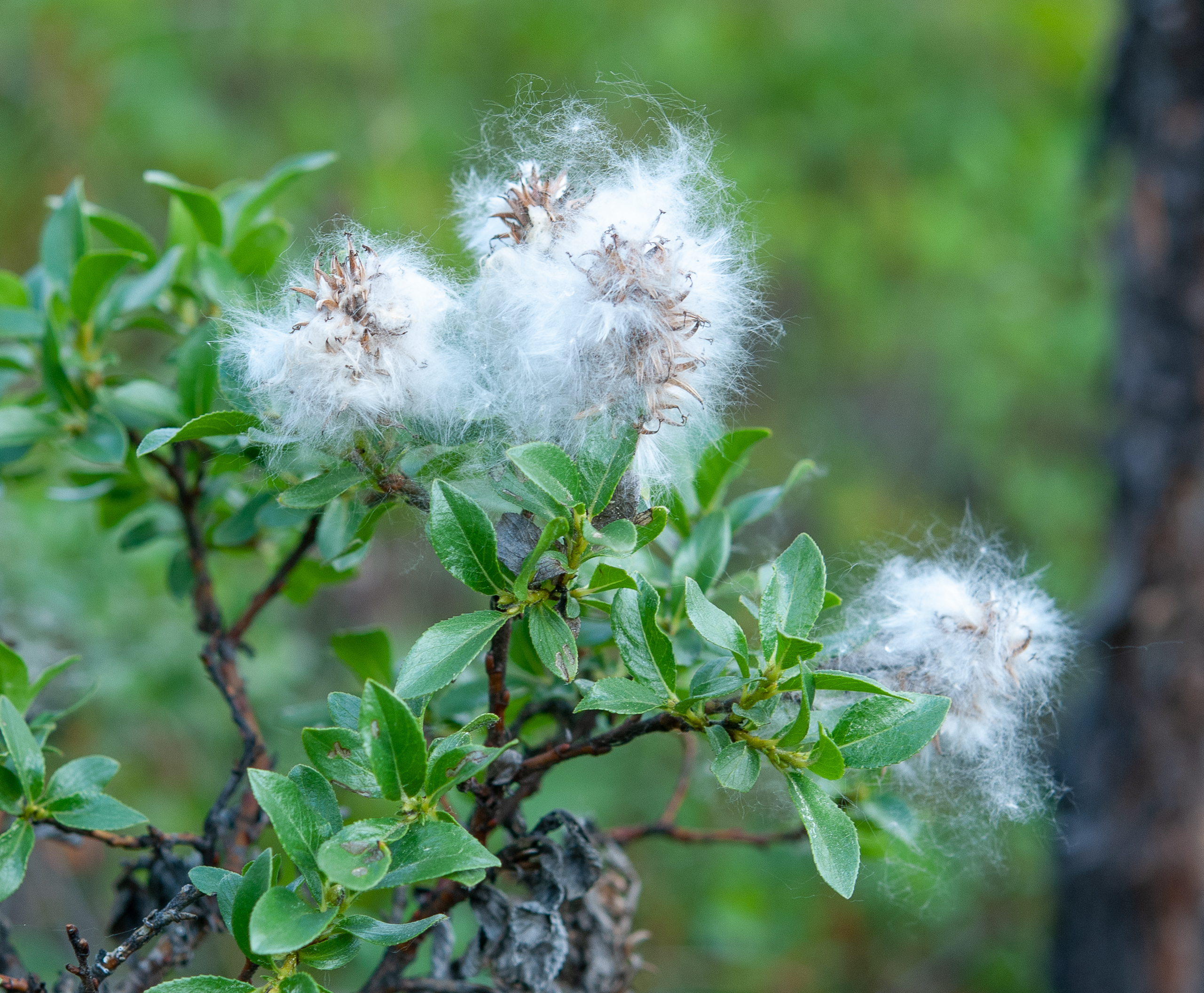 Seed-bearing catkins of S. myrsinites are supported by short stalks with a few medium-sized leaves, and are composed by numerous orange, red, or purple capsules that are covered by short pubescence. 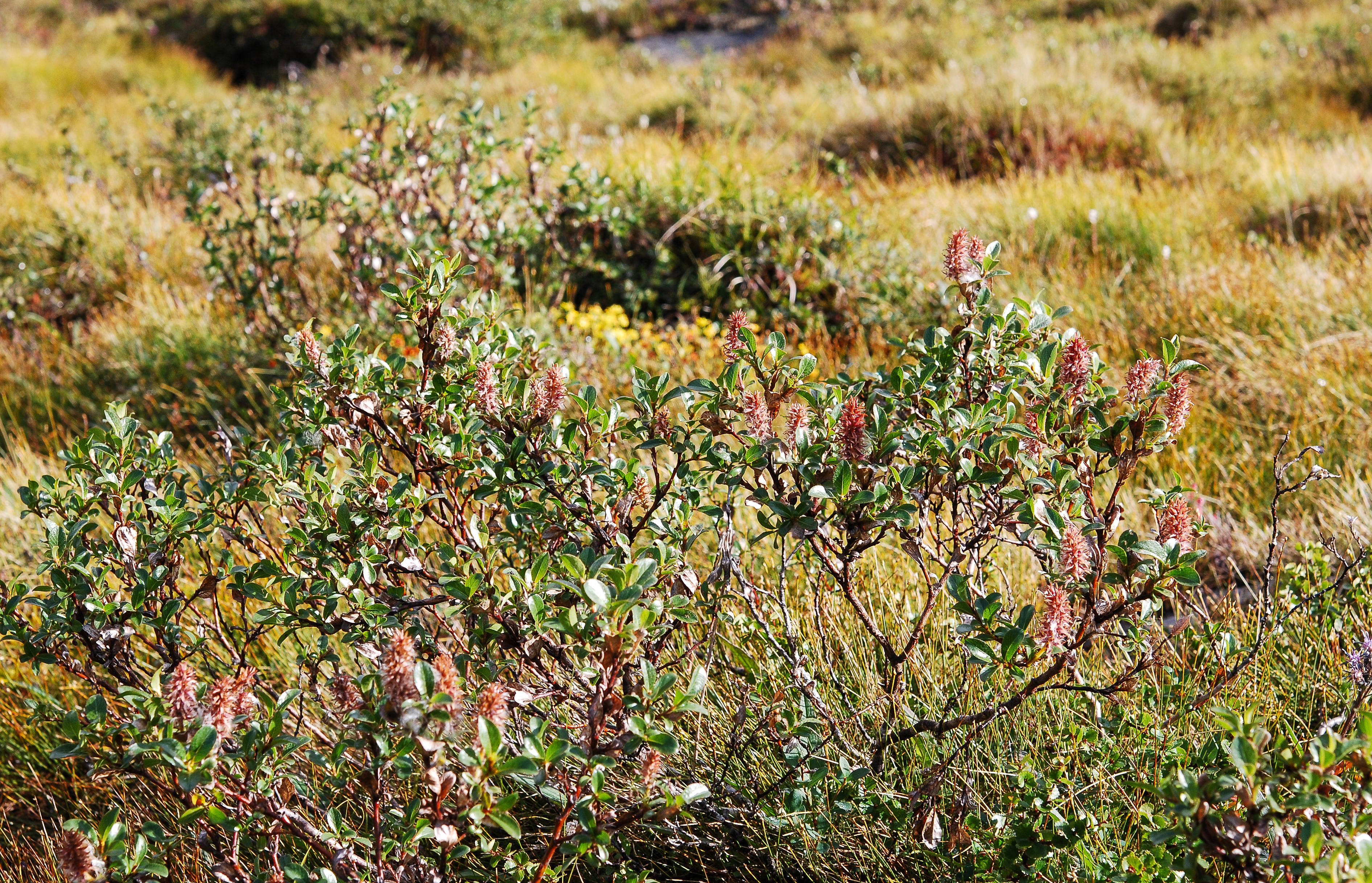 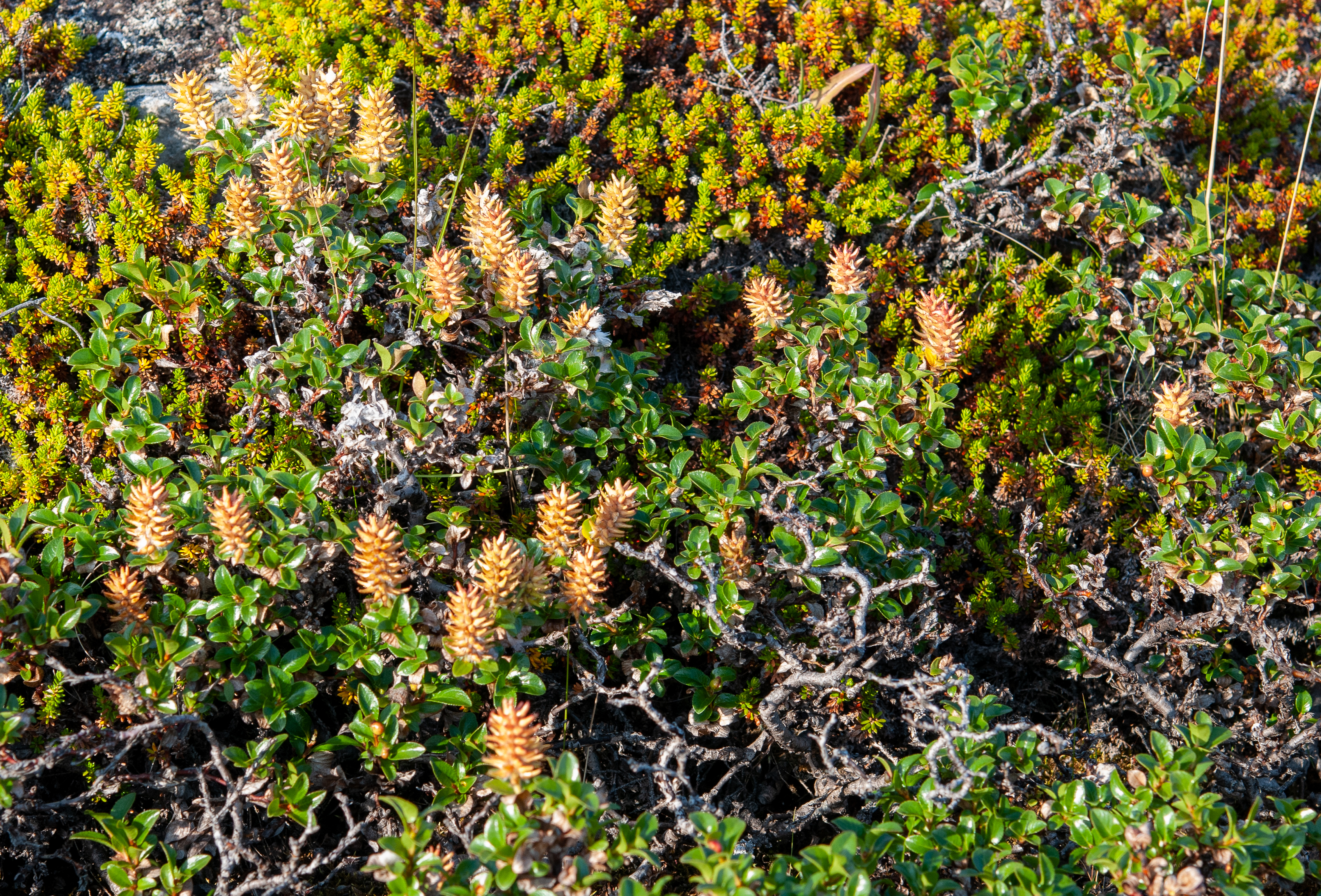 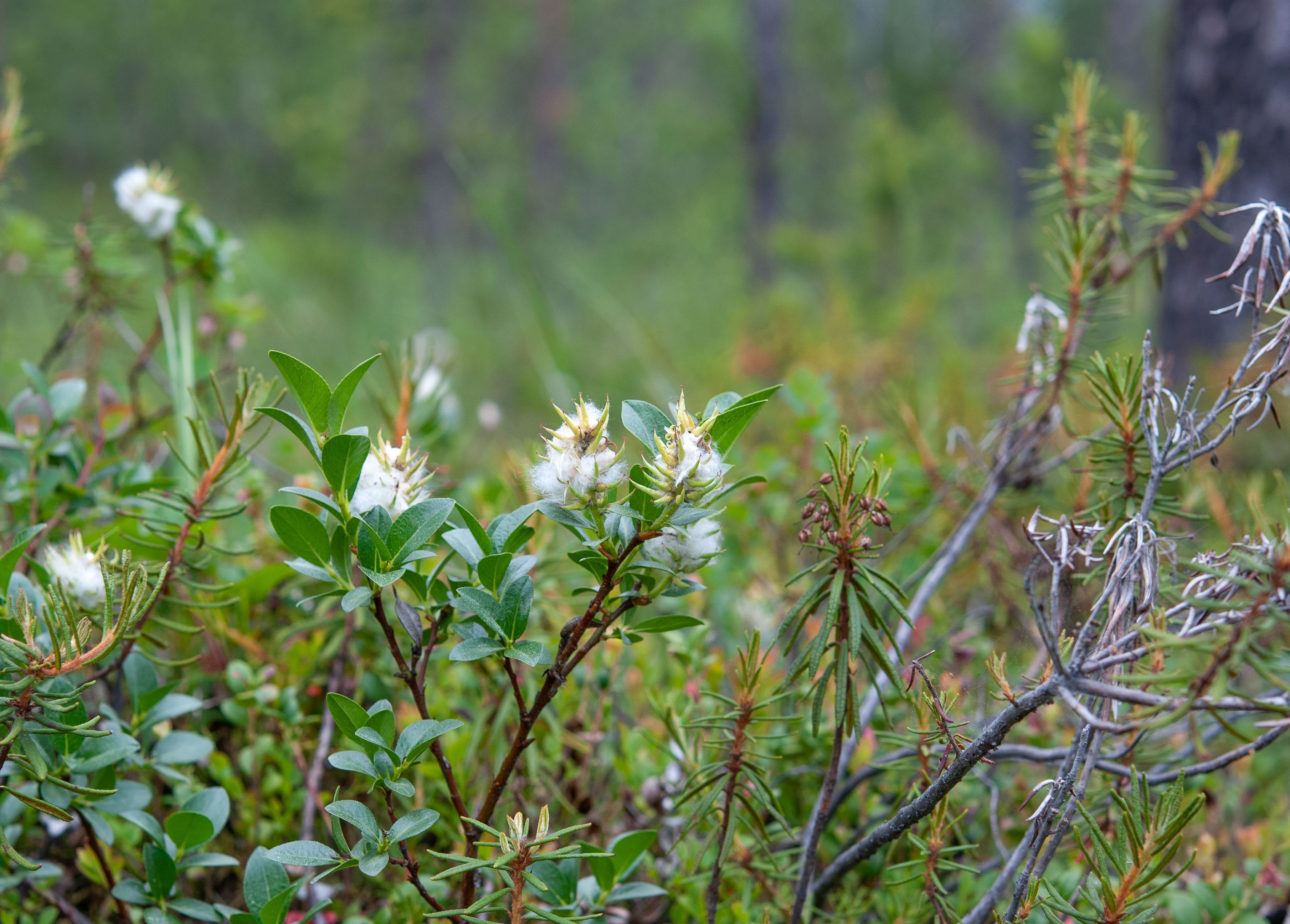 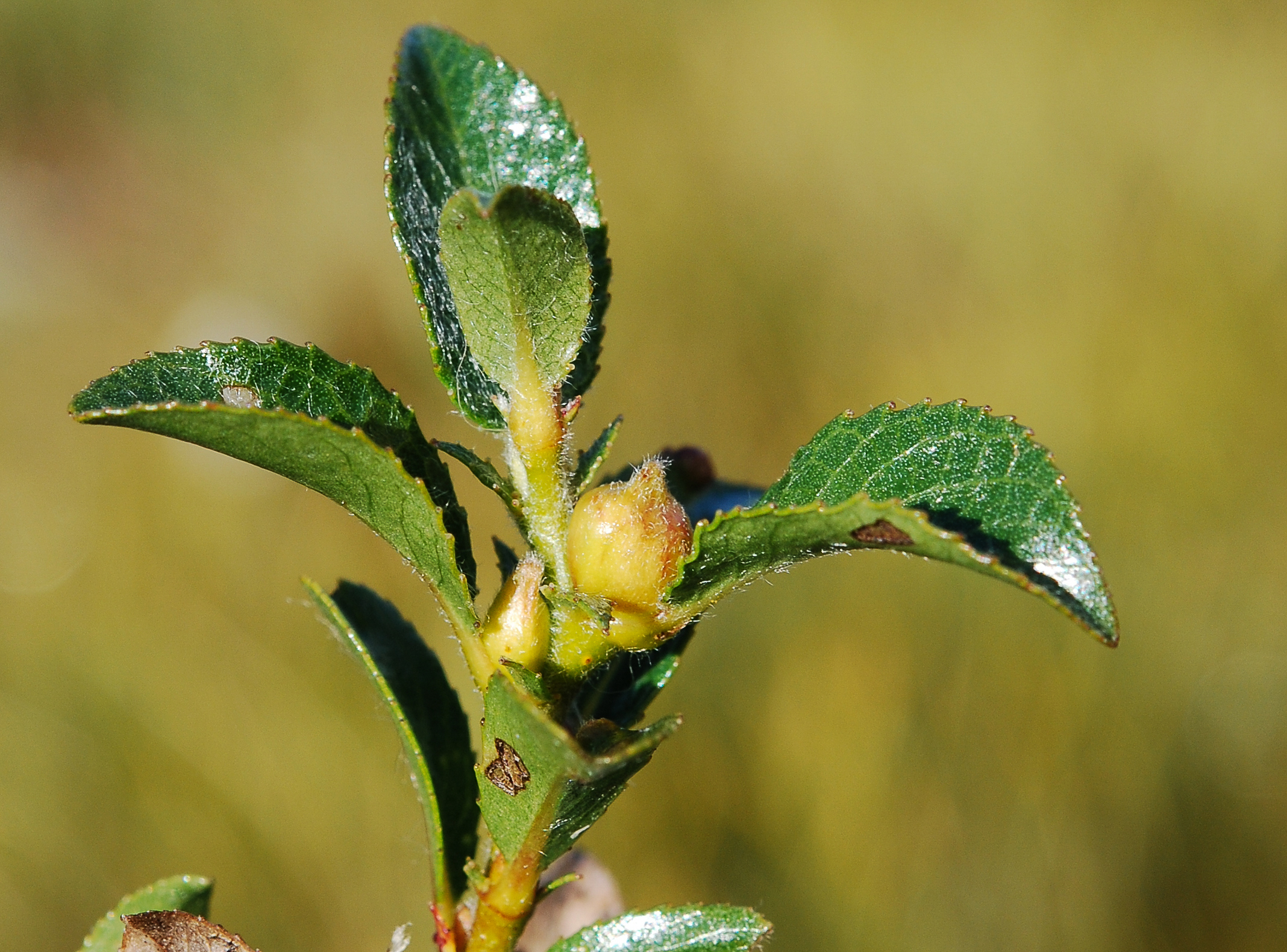 S. myrsinites has a strong preference for calcareous soils, so the species is generally restricted to nutrient-rich bogs and limestone areas on fjells. On more southern swamps, potential sites can be found by searching for the likewise calcium-loving but more visible common juniper (Juniperus communis). On the northern Norwegian coastline, S. myrsinites grows abundantly on low shorelines that receive nutrients from the sea.

Gall-inducing sawflies and catkin-feeding sawflies and flies feed on S. myrsinites, but otherwise the associated herbivore fauna is poorly known. The thick leaves of S. myrsinites, which are also chemically defended by high concentrations of phenolic compunds, probably constitute a challenging diet especially for mammals and non-adapted generalist insect herbivores. The pollinator community of S. myrsinites includes various bumblebees, bees, and wasps, as well as flies from several families (especially Syrphidae and Empididae), but the specific composition of the community has not been studied.